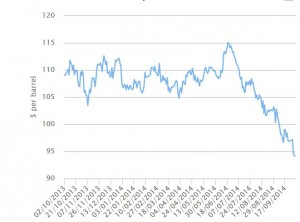 There has been a huge amount written over the last few days about the plummeting oil price.

The British Daily Telegraph newspaper is warning of an “oil war” as the price of Brent crude “tanks” on the back of oversupply in the market. (see graph)

Likewise, the Financial Times reports this morning that the price of crude has hit a low as the market chokes on a “glut”.

Since its high of $115 a barrel in June, the price of Brent Crude is now down about 20 per cent, and is currently about $91.50. Most of the decline in prcie has been caused by burgeoning North American production.

But the bottom line is that this drop has consequences for the international oil business, because many shale oil plays and tar sands investments need a high oil price to be profitable. And if the oil price keeps plummeting, it could be bad news for both.

As the Telegraph reports, at one point last week, crude for November delivery “dropped below the psychologically important $90 pricing level, raising fears that a prolonged slump could put many of America’s shale drillers out of business.”

Every day, the profit margins are getting tighter and tighter. Fracked shale oil costs up to $80 per barrel to produce, and as the Telegraph notes “at current price levels many of these new so called ‘tight oil’ wells are approaching the point when they will soon become unprofitable.”

And that may soon happen. Reuters is reporting that “even prices slipping towards $90 a barrel may curb the appetite for further investment.”

Another industry analyst wrote yesterday that there would be “sustained pullback” of investment in US shale if oil prices continued to fall below $80.

So is $80 on the cards? Already analysts at Credit Suisse have cut their 2016 Brent oil price forecast to $93 a barrel with even lower forecasts of $88 for 2017 as they predict North American output will “overwhelm” global demand.

And if that happens, we are looking at around $80 a barrel.

This will impact the development of the tar sands too. According to the Canadian Energy Research Institute the oil price needed for a steam-assisted gravity tar sands project is US$75, whereas the price necessary for a new tar sands mine with upgrading capacity is US$100 per barrel. We are already $10 below this benchmark.

Many people are now speculating what OPEC will do next month at its meeting in November.

It looks increasingly likely that the cartel will curb production to keep oil prices high. But conversely it could also allow prices to drop to curtail North American production which is essentially its competition. And if it does that, many shale oil plays and tar sands operations could be heading for trouble.