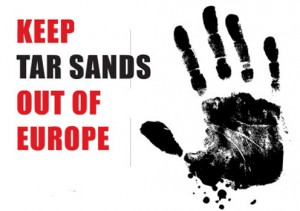 There is really bad news coming out of Brussels.

After one of the most aggressive and disingenuous lobbying campaigns in recent years, Canada has won “big concessions” in its fight against the landmark European climate legislation, called the Fuel Quality Directive (FQD).

It was back in September 2009, that the EU proposed a new FQD which would have labelled tar sands as more carbon intensive than traditional fuels. The proposal caused outrage with the Canadian government launching an unprecedented lobbying campaign to essentially bully the EU to change its mind.

The reason the Canadian campaign was so intense was, as the Financial Times put it, the Directive “would have made it very difficult to sell either crude oil from the tar sands or fuels made from that crude in Europe.”

In July 2011, working with Friends of the Earth Europe, we revealed the extent of what we called the Canadian Government’s “Dirty Lobby Diary.”

On this blog, I have written about it extensively. For more see blogs here, here, and here.

And all this lobbying has paid off. The Financial Times reports that “Canadian officials have persuaded the European Commission to change the methodology” for the latest draft of Directive.

The paper adds that “The result of the changes, if approved, would be that fuels derived from tar sands would not face discriminatory penalties.”

The Canadian press puts it another way: “The European Commission has removed the most contentious part of the FQD that would impose new hurdles for Canadian imports.”

As the Globe and Mail says: “The apparent change in policy would represent a much-needed win for Canada’s oil sands”.

A win for the tar sands is devastating news for the climate. It means that the whole original rationale behind the Directive – to try and dissuade people using carbon intensive dirty fuels – such as the tar sands, has been ripped up.

After years of intense brutal lobbying, the Canadians have won. The EU has buckled to the bully boys from Canada.

One European politician tells the FT that Connie Hedegaard, the EU climate action commissioner, a keen advocate of the Directive just “got beat”.

It means that there will be many more tankers of dirty fuels heading from Canada to the UK. It means there will be even more Canadian pressure on President Obama to approve the controversial Keystone XL pipeline, which always was an export route for the tar sands.

The new watered-down, essentially worthless, Directive is due to be published by the European Commission next month. It then needs approval from European member states and the European parliament.

But here once again, Canada’s lobbying has paid off. The country’s Prime Minister Stephen Harper, who ironically is in Europe this week, has won backing from key countries such as Britain, Poland and Italy, to deepen Canadian – European energy ties, supposedly to “enhance security of supply”, at the expense of the climate.

So it is highly likely that the new Directive will be passed. The Canadians have won. There will be champagne corks popping in the oil industry offices in Alberta.