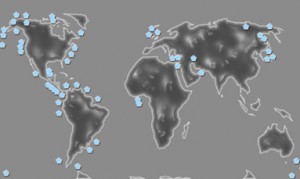 Just as the concern surrounding leaking methane hydrates increases from a climate perspective, with scientists warning about a $60 trillion “economic time-bomb”, so does the hype about tapping hydrates as an energy resource.

I blogged back in March this year about the madness of trying to drill methane hydrates – sometimes called fire ice – and what this would mean for the climate.

Let’s not forget that methane is a much more potent greenhouse gas than carbon dioxide.

However the methane hydrate hype continues. The Wall Street Journal European edition today reports that scientists in Japan and the US say they are “moving closer” to tapping the methane hydrate resource – which they put at 700,000 trillion cubic feet or “more energy than all previously discovered oil and gas combined”.

And that energy contains one hell of a lot of carbon. In short, methane hydrates are likely to be fool’s gold.

As the Washington Post has pointed out before: If a “significant fraction” of hydrates are developed the bottom line is that “It could prove impossible to keep global warming below the goal of 2°C”.

Beyond the fact that we cannot afford to burn the carbon anyway, another major worry could be catastrophic leakage rates. As the WSJ concedes: “The biggest concern is that the sediment that contains methane hydrate is inherently unstable, meaning a drilling accident could set off a landslide that sends massive amounts of methane—a potent greenhouse gas—bubbling up through the ocean and into the atmosphere.”

But analysts are thinking that methane hydrate drilling could be the next big energy revolution after fracking.

Surya Rajan, an analyst at IHS CERA, tells the paper: “If you look at what a dramatic shift the North American gas industry has gone through, could you afford to bet against something similar happening in methane hydrate?”

The hype around the technology is slowly building, as hydrates are found around the world (see map). It may be a decade or so before it becomes commercially viable, China plans to host an international conference on the issue next year. Both India and America are looking to exploit hydrates – with a massive 6.7 quadrillion cubic feet of methane hydrate clusters in the northern Gulf of Mexico alone.

We are getting into silly numbers here, leading to a huge amount of hype.

It is also leading to a huge amount of concern from environmentalist and conservationists. “Adding more methane to the atmosphere is a really bad idea,” argues Kert Davies, research director at Greenpeace.

Richard Charter, a senior researcher at the Ocean Foundation, adds simply: “Hydrates, when and if they ever turn out to be commercially extractable, will be just one more excuse to fiddle while Rome burns.”