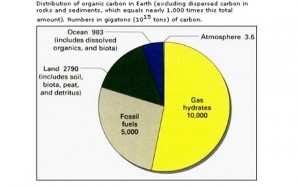 The complete folly of our current energy path was once again laid bare yesterday with the news from Japan that the state-owned oil and gas company JOGMEC had successfully drilled under the seabed into deposits of methane hydrate.

Methane hydrates are ice-like solids, a crystalline mix of frozen methane and water.  They are sometimes known as flammable ice.

There are vast swathes of methane hydrates buried beneath the Arctic tundra – and there are also huge deposits to be found offshore in depths of 200 to 500 metres.

The US Geological Survey argues that methane hydrates offer an “immense carbon reservoir”, twice all other known fossil fuels on earth. That is potentially one huge amount of carbon that could be burnt or released into the atmosphere.

For anyone worried about climate change, the exploitation of methane hydrates is potentially disastrous news. For decades climate scientists have warned of the dangers of how a melting Arctic could lead to climate chaos, by releasing vast tonnes of methane – a potent greenhouse gas.

At the same time, the oil industry has been looking to exploit the offshore methane hydrates entrapped beneath the sea. And yesterday came the news from the industry that they had been successful.

“This is the world’s first trial production of gas from oceanic methane hydrates, and I hope we will be able to confirm stable gas production,” said Toshimitsu Motegi, the Japanese trade minister, at a news conference in Tokyo.

He likened the considerable technological challenges to that of shale gas, which was “considered technologically difficult to extract but is now produced on a large scale.  By tackling these challenges one by one, we could soon start tapping the resources that surround Japan.”

The Japanese company JOGMEC added: “Methane hydrates available within Japan’s territorial waters may well be able to supply the nation’s natural gas needs for a century”.

The company said its immediate discovery holds some 40 trillion cubic feet of methane, equivalent to eleven years of imports and hopes to bring the gas to market within five years.

You can understand why the Japanese are keen on the technology. They have no domestic reserves of conventional fossil fuels to speak of and the country is the largest importer of LNG and was heavily reliant on nuclear power. Two years ago Fukushima changed everything and Japan switched off all but two of its reactors.

The last two years have been incredibly difficult for Japan, but the country’s Institute of Energy Economics argues that methane hydrate could be the “game-changer” which could help make the country energy competitive.

But here is the rub: we know we can’t burn all of the fossil fuel reserves, without causing climate chaos.

So the concept of burning a new type of carbon – methane hydrates – just seems madness from a climate perspective.

Furthermore, to make things worse: the risk of methane leakage into the atmosphere during extraction of hydrates will be a major problem.

As an article in the New York Times yesterday points out: “The exact properties of undersea hydrates and how they might affect the environment are still poorly understood, given that methane is a greenhouse gas.”

But others are following Japan’s lead: Canada, the US and China are all looking into ways of exploiting methane hydrate deposits.

Although an unknown quantity could never be exploited, these vastly outweigh US shale reserves which are estimated to contain 827 trillion cubic feet of natural gas.

The exploitation of methane hydrates may make fracking and the tar sands look like a walk in the park.

The Washington Post points out the blindingly obvious: If a “significant fraction” of hydrates are developed the bottom line is that “It could prove impossible to keep global warming below the goal of 2°C”.

So we are now willingly exploiting a new resource of carbon, knowing it will lead to climate chaos. That seems madness to me.