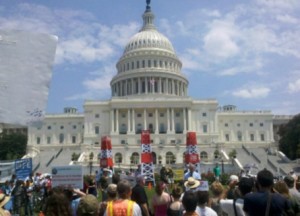 We support those battling on the front lines of hydraulic fracturing, or ‘fracking’ – an extreme fossil fuel technology that is expanding at a frenzied pace.

Hydraulic fracturing, or “fracking”, is the process of injecting high-pressure water, sand and chemicals deep underground to extract natural gas or oil. While the technology has been used for some time, public opposition to this highly invasive and destructive process has skyrocketed in recent years alongside the rapid growth of the industry.

Fracking uses huge amounts of resources – a fracking well is often injected with more than a million gallons of water, chemicals, and sand at high pressure. Many of the chemicals used are toxic and several are known to cause cancer. Studies have found that between 20 to 85 percent of fracking fluids stay underground, where they can contaminate groundwater.

The fracking industry is booming. In Ohio alone, it’s estimated that the number of wells that use fracking will increase from 77 to 2,300 in the next three years. Communities from California to Vermont are fighting local, state and federal decisions related to fracking, and some of the hottest battlegrounds center around the Utica and Marcellus Shales, which together extend through Pennsylvania, Ohio, New York, West Virginia, Virginia, Maryland, New Jersey, Kentucky and Tennessee.

Challenges
The expansion of the fracking industry is far outpacing our understanding of the extent of its negative impacts. The industry is in search of quick profits at the expense of the health of those people living near the wells and without concern for the huge impact on water or energy resources required to frack.

The industry’s influence over our democracy, through campaign contributions and heavy lobbying at the local, state, and federal levels, is fueling fracking’s rapid expansion. As long as decisionmakers are taking money from the industry, protest from communities and individuals impacted by fracking at the local level will be stifled. It’s clear that money talks when it comes to protecting the interests of communities over companies.