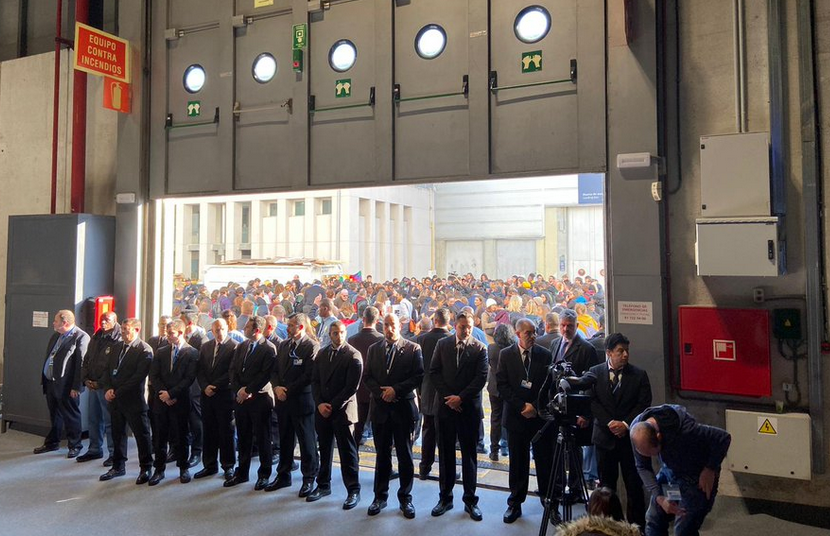 Two days ago, I blogged calling for the Polluters to be kicked out of the UN climate process.

Two days later, and what has the UN done? It has kicked the people out – and not the polluters.

This morning, youth activists from over a dozen countries stormed the stage at a COP25 plenary session to demand real climate action. They occupied the stage chanting “We are unstoppable, another world is possible.”

The inspiring action was followed by a disruptive action in the afternoon when 320 members of civil society organized a cacerolazo action banging metal cups and utensils before the plenary session where UN Secretary General Antonio Guterres was to give a speech. The people represented a broad coalition of young people, indigenous people, frontline communities, women and gender activists and trade unionists. They called on rich countries to “Step Up, Pay Up.” The protest was interrupted when several security officials violently struggled to take a banner from a protester.

Fridays For Future just occupied the main plenary stage at #COP25. Nobody has ever done an action like this before, the times are changing pic.twitter.com/HvRbcmWDyB

Oil Change International was there to witness the events:

HAPPENING NOW: Mass action just started at #COP25 in Madrid. As the talks again slide toward inaction (or worse) civil society is sounding the alarm – literally ???.

The reason for the protest was clear: It was a message to the rich industrialized countries who refuse to meet their commitments under the Paris Agreement and human rights law to provide finance to support communities suffering from increasingly severe disasters.

It was a message to the corporate polluters, who roam these halls attempting to profit from the world’s suffering with their false solutions to climate change rather than making a transition away from a fossil fuel economy and paying for the damage they’ve done.

As Earther reported: The reason for the protest are 25-years of futility, broken promises, and negligence” during the climate process. “And people are sick of it.”

In response, the authorities, rather than listening to peoples’ concerns, kicked hundreds of delegates out and banned them from reentering the conference.

Security now pushing and shoving peaceful disruption of #COP25 climate talks in Madrid. There’s a climate emergency underway and rich countries are looking for loopholes instead of solutions. #StepUpPayUp. pic.twitter.com/L1OKNkS0Af

The moment the #UNFCCC herded the protest outside + shut the door on the people + their demands for real solutions not carbon markets, for rich countries to pay for the destruction suffered already in poorer counties from a heating climate they didn't cause #stepuppayup #COP25 pic.twitter.com/jNvrlZygJq

It seems the #COP25 made the most shameful kind of history today: Shortly after welcoming @GretaThunberg to speak, more than 100 climate activists got forcefully thrown out after a peaceful protest. That has never happened before, it’s outrageous.
The people won’t be silenced. ? https://t.co/UuztFmPqkp

The statement said: “Instead of kicking out these polluters, the UNFCCC 25th Conferences of the Parties (COP25) kicked out the people. Instead of listening to our voices, they attempted to silence us. We were pushed, bullied, and touched without our consent. We were driven out of the negotiating halls, told that we can take our action outside as they raised an enormous metal door and herded us out.”

It continued: “We weren’t advised to the intentions of the UN security to take our badges. We stood out in the cold, many without our jackets and coats as we later watched the enormous metal door lock us out in the cold. An Indigenous woman was not allowed to go back inside to feed her baby.

The statement highlighted that this had never happened before in 25 years of negotiations, but yet, there “could be no better symbol of this crisis we face. People around the world are crying out for justice, and fighting oppression, while those in power attempt to shut us out.”

The statement finished by saying “We will not back down. We demand full access for civil society, the people of the world, to these negotiations and all international processes. We demand that our voices be heard.”

As Angela Valenzuela, a student climate striker from Chile who took part in the actions today, said, “From Santiago to Madrid, the world is waking up to the climate crisis!”

“We say enough. We no longer support the systems that drive the climate crisis. We will continue to rise against governments that don’t represent us, and that prioritize profit over the wellbeing of its people and climate.”

As we enter a decade that will define all the ones after it, we need to stand together against fossil fuel companies and the governments that prop them up — at the UNFCCC and everywhere.