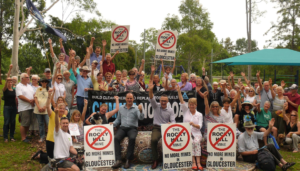 In a landmark decision which will reverberate around Australia and beyond, a court has ruled that a controversial open cast coal mine in the country cannot proceed on climate grounds, as well as other issues.

It is hugely significant that the courts now see exploiting coal as being incompatible with a safe climate.

The Rocky Hill mine in the Hunter Valley has long been a source of dispute. The mining company, Gloucester Resources wanted to mine 21 million tonnes of coal over a period of 16 years.

But earlier today, a judge dismissed an appeal by Gloucester Resources, which was attempting to overturn a previous ruling by the New South Wales government to reject the open-cut mine because of its adverse social, visual impacts, but also due to climate change.

This is the first time in Australia that a court has ruled on climate being a major factor in the planning decision of a coal mine.

“The construction and operation of the mine, and the transportation and combustion of the coal from the mine, will result in the emission of greenhouse gases, which will contribute to climate change,” the judge ruled.

Citing the mine’s impact on climate change, the judge ruled that the open cast coalmine “would be in the wrong place at the wrong time”.

“Wrong place because an open cut coal mine in this scenic and cultural landscape, proximate to many people’s homes and farms, will cause significant planning, amenity, visual and social impacts,” he wrote.

“Wrong time because the GHG [greenhouse gas] emissions of the coal mine and its coal product will increase global total concentrations of GHGs at a time when what is now urgently needed, in order to meet generally agreed climate targets, is a rapid and deep decrease in GHG emissions. These dire consequences should be avoided. The project should be refused.”

The judge added: “The global problem of climate change needs to be addressed by multiple local actions to mitigate emissions by sources and remove greenhouse gases by sinks.”

But it is the mention of climate change that will have the coal industry reeling.

As the Sydney Moring Herald pointed out: This is the first time an Australia court has highlighted a mine’s contribution to total global greenhouse gas emissions as a key reason to reject its approval.

And the fact that the judgement was made by such a senior judge “means his decision will likely carry significant influence in other courts across Australia.” Similar concerns are now likely to be made in other ongoing legal cases.

Local environmental groups were ecstatic: David Morris, the chief executive of Environmental Defenders Office in New South Wales, which was party to the legal action, said the judgment was “momentous” and would also be “profoundly influential” for any future fossil fuel projects in the country.

He told the Guardian: “It’s very difficult to see how any future coal project avoids the judge’s finding about this being the wrong time for it.”

Climate Council Chief Executive, Amanda McKenzie, also told the paper that the court “has effectively ruled that coal – just like tobacco and asbestos – is bad for us. I’m thrilled to see the law catching up with the science.”

Professor Will Steffen, an adjunct professor at the Australian National University, who gave evidence in court, added: “It is absolutely clear that the Paris climate targets cannot be met if we continue to open up new fossil fuel reserves”.

Steffen continued: “This landmark decision sends a clear message to the fossil fuel industry that it cannot continue to expand if we are serious about tackling climate change.”

The ruling could have significant international ramifications, as Australia is the world’s largest exporter of coal.