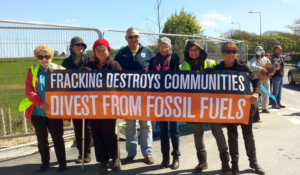 The prospects for the shale industry in Europe are looking increasingly bleak this year as it haemorrhages investor cash, continues to experience widespread community resistance, especially in Europe, and fails to find adequate gas reserves.

In the UK, the number of onshore oil and gas wells drilled last year was at a 68-year low. Indeed, the fledgling shale industry is struggling to even drill a commercial well and the fracking company, Cuadrilla, which is leading the shale gas charge, suspended drilling before Christmas at its landmark site in Lancashire.

After causing numerous and repeated seismic tremors, Cuadrilla, far from drilling at full speed ahead in 2019, is now removing drilling material from the site. No one knows if it will ever return.

Another fracking company, Third Energy, which is trying to frack across the Pennines in North Yorkshire, still seems to be trying to either find an investor or a massive cash injection to prove its financial resilience to the British Government. But any fracking at its operations in North Yorkshire currently seem a long way off, or even a distant pipe dream.

And further south in the UK there is more bad news for the industry. As the Guardian reported last week: “The 10 local authorities that make up Greater Manchester will put planning measures in place to create a ‘presumption’ against fracking for shale gas”, as part efforts to become carbon neutral by 2038.

In the US the industry is meanwhile facing scrutiny from investors. The Wall Street Journal reported last week, in an indepth article entitled: “Fracking’s secret problem: oil wells aren’t producing as much as forecast” that “Thousands of shale wells drilled in the last five years are pumping less oil and gas than their owners forecast to investors, raising questions about the strength and profitability of the fracking boom that turned the U.S. into an oil superpower.”

As the fracking investors pour billions of investor cash into a volatile industry fueling climate disaster, every day the smart money moves elsewhere. Over $7 trillion worth of funds have now committed to fossil fuel disinvestment.

As Deirdre Duff, from Friends of the Earth UK notes simply: “Ethical arguments aside, it doesn’t make financial sense to invest in fossil fuels today.”