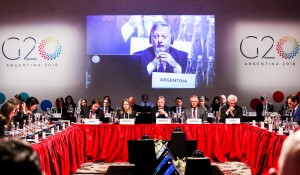 Energy ministers from the world’s 20 biggest economies met in Argentina last week releasing a communique on Friday that was intended to sum up the group’s commitment to the “role of energy in promoting fair and sustainable development”.

But the meetings and resulting statement were overshadowed by two fundamental compromises: on the one hand, while the Trump Administration rejected the Paris Agreement, other G20 energy ministers stood strong and reiterated their commitment to climate action. Yet on the other hand, G20 energy ministers contradicted themselves by cheerleading the expansion of fossil gas production and consumption, despite clear evidence that Paris goals cannot be met if we expand fossil fuel infrastructure.

The statement on fossil gas focuses on the “potential to expand significantly over the coming decades.” While this sounds like pro-fossil fuel propaganda from team Trump, it unfortunately reflects an agenda that is shared among many G20 countries, although equally misguided. It repeats the myth that gas supports “transitions towards lower emission energy systems” and expresses support for expanded gas markets and LNG and gas storage infrastructure; G20 energy ministers said all of this despite clear evidence that the production and consumption of gas must decline and that growing gas production is slowing not supporting the transition to clean energy.

Oil Change International, together with 20 global organizations, released a report ahead of the energy ministers meeting last week highlighting the compromising position of many G20 countries on fossil gas in light of their stated commitment to the Paris climate goals.

The report, called “Debunked: the G20 Clean Gas Myth” reveals that many G20 countries are planning a massive expansion of fossil gas production, so much that G20 gas production alone could wipe away two-thirds of the carbon budget for 1.5 degrees by 2050.

Here are the key findings:

Given these facts, the nineteen G20 members that are committed to the Paris Agreement are compromised not only by the belligerence of the current U.S. administration’s brazen pro-fossil fuel agenda, but also by the many member nations who have put the continued exploitation of their gas reserves ahead of sound climate policy.

There is an urgent need for policymakers to use climate goals as a starting point for decisions around fossil gas, in the G20 process and elsewhere. Rather than searching for ways to justify using the abundant supply that new drilling methods have unleashed, policymakers should consider how much fossil gas is compatible with achieving the goals of the Paris Agreement.

The answer is the same for fossil gas as it is for coal and oil: We need less, not more.