At the end of this month, the deadline expires for Shell to set out its plans to align with the Paris goals before Dutch environmental groups begin legal action.

In a previous blog, I explored Shell’s failure to align with the Paris goals from an investor perspective. In this post I’ll focus more on the moral (and potentially legal) dimensions of Shell’s climate plans.

Shell claims to “take leadership in the energy transition.” The centrepiece of its approach is an ambition to halve the emissions intensity (per energy unit) of its products by 2050, which it claims matches the needed progress towards the Paris goals.

Here’s the problem though. Climate change is caused by greenhouse gases, not by the ratio of emissions per joule. At current rates of growth, Shell’s energy production could triple from current levels by 2050* – so even if it halved the intensity of the energy, that would still mean a 50% increase in Shell’s emissions. This is illustrated in the graph below. 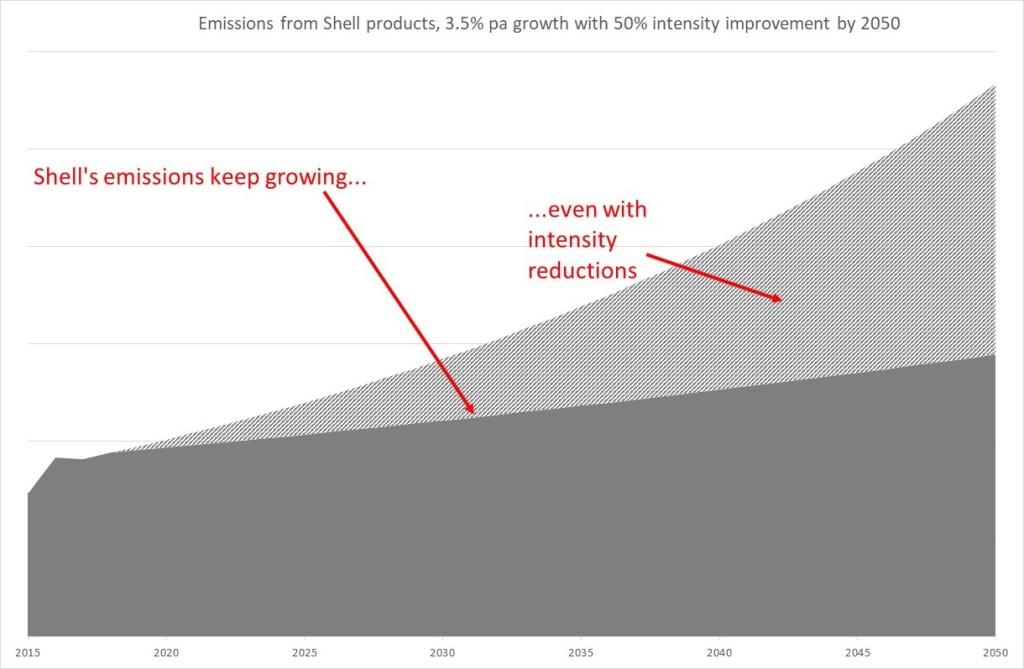 Shell says that “We have already initiated appropriate and sufficient action to address the issues and opportunities arising from the energy transition.” The company argues that it is for governments to drive the transition, and consumers to select low-carbon energy products. It sees its responsibility for climate change as limited to ensuring that it “thrives” financially by supplying its energy products whilst governments and consumers do so.

It may not even achieve this. Shell’s Energy Transition Report, published last month, described the company’s strategy for remaining profitable in three different possible futures, one of which – the “Sky” scenario published two weeks earlier – was meant to be aligned with the Paris goals. As I pointed out at the time, “Sky” misinterprets the Paris goals. It also assumes technologies will be invented to suck carbon out of the atmosphere and deployed at an enormous scale. With oil, gas and coal demand barely changed from current levels by 2050, and all assumptions falling in its favour, Shell shows (unsurprisingly) that it will thrive in this scenario.

In Shell’s morality though, courts would have found that cigarette companies were not responsible for the harms caused by their products, but rather for remaining profitable while smokers tried to cut back. Very likely, their efforts to cut back may have been slowed down by the companies’ strategies to remain profitable.

And herein lies Shell’s responsibility for climate change. In seeking to remain profitable, it has lobbied against the very kind of policies it says should be the solution, policies that would reduce consumers’ use of fossil fuels. Despite arguing that carbon pricing is the best way forward, Shell continues to claim government subsidies that effectively serve as a negative price on carbon. And perhaps most importantly, Shell’s continued expansion of fossil fuel supply worsens the climate problem.

Removing one arm of the scissors

Shell said that a similar resolution at last year’s shareholder meeting, “demonstrates fundamental misunderstanding of the necessary solutions to achieving the Paris goals… Unless overall consumption of hydrocarbons is reduced, unilaterally limiting their supply from a single company would merely result in another supplier filling the gap, achieving no reduction overall in CO2 emissions.”

However, the fundamental misunderstanding lies in Shell’s own claim. Anyone who has studied economics will know – often from the very first lesson – that markets are shaped by both supply and demand. Consumption is not some fixed amount, which suppliers have to deliver – it is determined by the interaction of supply and demand through the price mechanism. As Alfred Marshall wrote in his Principles of Economics in 1890, cited in a recent research paper on climate policy:

We might as reasonably dispute whether it is the upper or the under blade of a pair of scissors that cuts a piece of paper, as whether value is governed by utility [demand] or cost of production [supply].

The only way Shell’s increased production of fossil fuels could be squared with the Paris goals is if other suppliers reduced their production. But every producer aims to grow. The increased supply pushes down the price, which in turn encourages increased consumption.

Over two percent of the anthropogenic carbon that is currently in the atmosphere was extracted by Shell. One legal argument then is that Shell is therefore liable for two percent of damages caused by climate change. In its claim that it can thrive through an energy transition, the company may have inadvertently admitted to its contribution to climate change, in two ways.

Firstly, in the Energy Transition Report, Shell argues that it has achieved resilience by reducing its production costs. This is intended to mean that Shell is becoming more competitive relative to other oil and gas companies (although naturally they are all also reducing costs). If the transition is to take place through consumer choices as Shell says, these cost reductions will also slow the transition down by making oil and gas more competitive relative to cleaner energy choices. Cutting costs is part of what any company does, but Shell cannot then claim that responsibility for the energy transition lies solely with consumers and governments.

Secondly, the Sky scenario stated (happily for Shell’s transition risk), “From 2018 to around 2030, there is clear recognition that the potential for dramatic short-term change in the energy system is limited, given the installed base of capital.”

This is the problem known as carbon lock-in: once upfront investments have been made, it is hard for new alternatives to compete with them. Indeed, Shell had earlier noted the problem, although referring to infrastructure elsewhere in the supply chain: “Once built, such major infrastructures stay in place – and shape our energy needs – for decades.” What this implies every time Shell builds a new platform or pipeline, or drills a new well, the company is committing the world to increased climate change.

The Paris goals require a rapid reduction in total emissions, potentially to zero by 2050 for the 1.5C goal. As we have seen, Shell is moving in the opposite direction.

According to one study published in Nature Climate Change, keeping up with the Paris goals would require the company to reduce the emissions from its products by between 3.5% and 5% per year (graph below), even if negative emissions technologies are available (and much faster if they are not). 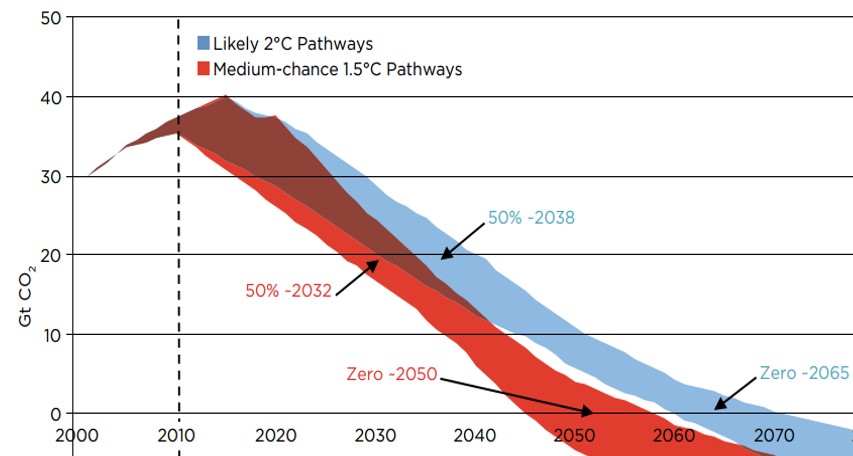 In response to last year’s shareholder resolution, Shell objected that emission reduction targets “would most likely force the company to cut production and sales of its products.” As for oil and gas, indeed they would: reducing fossil fuel production, sales and consumption are essential to achieving the Paris goals.

Our report The Sky’s Limit (no relation) estimated the emissions that could be locked in by the oilfields, gas fields and coal mines already in operation. We found that those emissions would exceed the carbon budget for keeping warming below 2 degrees Celsius (graph below). The oil and gas alone – without any coal – would take warming beyond 1.5 degrees. Given how difficult it is to compete with projects whose capital has already been sunk, we argued that the fossil fuel industry should stop developing new infrastructure, and governments should instead manage the decline of what we have already. The private sector should focus investment on zero-carbon energy. 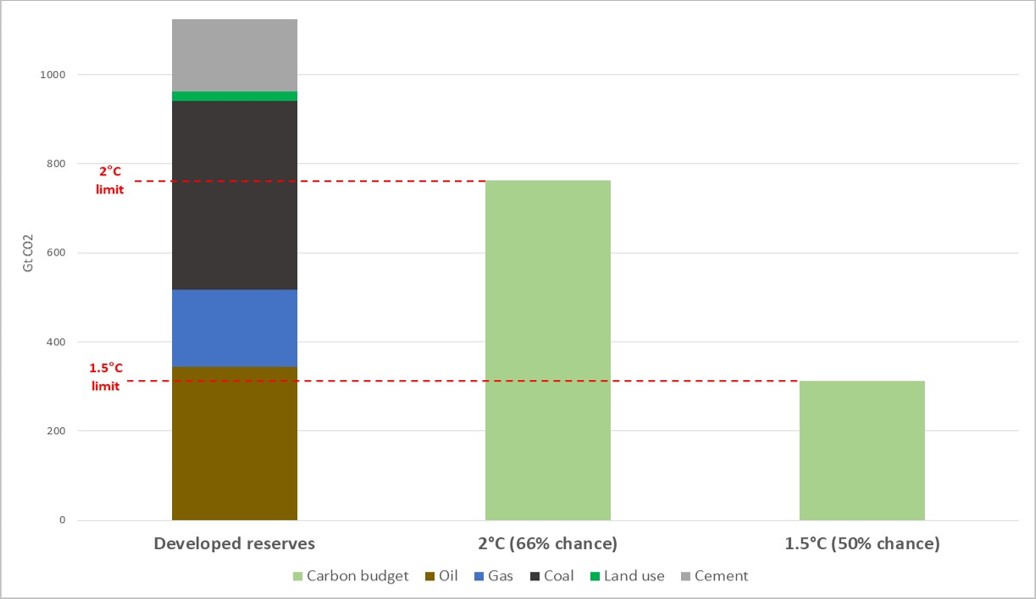 If that sounds like a rapid change, it is because the remaining atmospheric space is so depleted. The IPCC’s carbon budget for 1.5 degrees Celsius will be fully exhausted in just eight years’ time at current emissions rates, and the budget for a 2-in-3 chance of staying below 2 degrees in 19 years.

In 2015, a year into his role as Shell’s chief executive, Ben van Beurden said of the urgency of the climate challenge, “I wish we had been starting 20 years ago”.

If Shell had started 20 years ago, reducing emissions intensity might have been a reasonable start. For example, Shell’s claim last year that “in the near term the greatest contribution Shell can make is to continue to grow the role of natural gas”, is inconsistent with the Paris goals, as we showed in a briefing last year: the world needs to move straight from fossil fuels to clean energy, very rapidly.

In any case, van Beurden cannot reasonably make that complaint. Shell has known about climate change for at least 35 years. Indeed, it was 20 years ago that Shell claimed to be part of the solution to climate change, in its “Profits and Principles” report, and a subsequent advertising campaign. Even today, Shell plans only 3 to 5 percent of its investment to go into its New Energies division ($1-2 bn out of $30 bn, by 2020), which includes renewable energy among other things.

We believe Shell should align its business with the Paris goals. To do so, it needs at a minimum to stop developing new oil and gas fields: it should conduct a managed decline of oil and gas production, and focus all investment on clean energy (or alternatively return the money to shareholders). Its current plans don’t even come close.

*: Shell’s oil and gas production has grown by about 3.5% CAGR a year since 2013, which if sustained would imply a tripling within 33 years. Measured in barrels of oil equivalent, including production by both subsidiaries and Shell share of joint ventures. Source: Shell Investor Handbook 2017.

Note that Shell’s commitment to reduce its emissions intensity relates to its production and sale of energy throughout the supply chain: we have extrapolated growth in upstream (extraction) because it is the largest of Shell’s three main operational segments by capital employed, and also the simplest for which to measure energy content. Some parts of Shell’s business have faster growth rates, others slower.