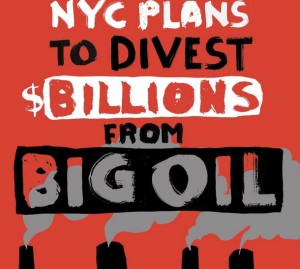 There was significant news today regarding the fossil fuel divestment initiative, when the city of New York became the first big city in America to divest $5 billions from fossil fuels.

However, the mayor of NYC, in a dual strategy, also announced that the city is going to sue the oil companies Shell, Exxon, Chevron, BP, Chevron and Conoco Philips for the “cost of protecting New Yorkers from the impacts of climate change”.

The aim, says the mayor of, Bill de Blasio, is to divest from fossil fuels within five years.

de Blasio said in a statement: “It’s time for Big Oil to take responsibility for the devastation they have wrought, that’s why New York City is making the unprecedented move to both sue and divest from fossil fuel companies.”

“We’ll be suing BP, Exxon, ConocoPhillips, Shell and Chevron and divesting up to $5 billion from nearly 190 companies”, said de Blasio. “After Sandy, it became clear that climate change was an active threat to our lives. It may have happened five years ago, but we are still dealing every day with the destruction it caused.”

He added: “It’s time for Big Oil to pay for that damage. We are the first major American city to take this action against fossil fuel companies. No other state has even done this. We are fighting for our lives and we will not wait for anyone else to do it for us.”

The Guardian reports that court documents state that New York is seeking to “shift the costs of protecting the city from climate change impacts back on to the companies that have done nearly all they could to create this existential threat”.

The court alleges that some 100 producers are responsible for some 2/3 of greenhouse emissions and that the oil industry knew for years that their products were causing climate change, in a scandal which has become known as #Exxonknew.

The move by NYC was welcomed by environmentalists. Christiana Figueres, the former head of climate at the UN told the Guardian, the move was “extremely encouraging to see NYC step up today to safeguard their city and exercise their role as investors to protect their beneficiaries from climate-risk.”

Bill McKibben, from 350.org wrote simply that the “Earth’s mightiest city is now in full-on battle with the planet’s richest, most irresponsible industry”.