Today, Pacific Island leaders at the UN climate negotiations delivered a clear, powerful message: ending the expansion of the fossil fuel industry must be on the agenda. One of the key themes on the sidelines of this year’s COP-23 climate conference in Bonn, Germany, has been the need to rein in fossil fuel production to stay within the climate limits agreed to in the Paris Agreement.

Throughout most of the history of UN climate negotiations, fossil fuels have barely been mentioned, as fossil fuel interests and powerful countries – including the USA, Australia, Canada, Saudi Arabia and other oil exporters – have blocked discussion of the main cause of the climate problem.

Now that is changing, as the climate crisis deepens. With the world having warmed so far by about 1 degree Celsius, people around the world are already losing their homes, livelihoods and lives to storms, droughts, wildfires, and rising food insecurity. Today, high level officials from Pacific Islands are making a call to end fossil fuel production with a strong moral urgency. Their nations’ very survival depends on it. “Fossil fuels will destroy our home. Two degrees will destroy our home,” said Anote Tong, former President of the island nation of Kiribati.

The Pacific leaders were joined in a press conference today by civil society, indigenous, and academic voices. Watch their powerful call here: https://unfccc.cloud.streamworld.de/webcast/oil-change-international-2 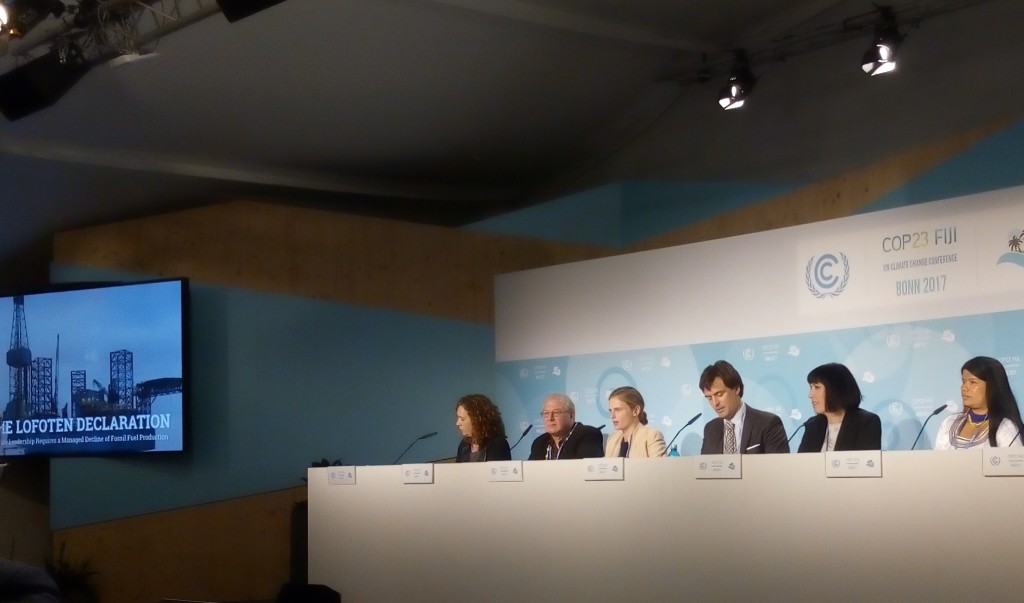 Francois Martel, Secretary General of the 12-nation Pacific Islands Development Forum, signed the Lofoten Declaration at the event, in order “to fight for this ambitious and urgent work to reduce emissions globally”. The Declaration affirms that it is the urgent responsibility and moral obligation of wealthy fossil fuel producers to lead in efforts to rein in fossil fuel production. The Lofoten Declaration has been signed by over 400 organizations globally

Patricia Gualinga, Leader of the Kichwa people of Sarayaku, whose people have successfully stopped oil development in their territory, said today: “We will never allow oil to be drilled in our territory. For the forest, for our lives, and for all humanity.”

Supporting the event, Ambassador Seyni Nafo, Chair of the African Group of climate change negotiators, said, “Achieving 1.5C will require a managed decline in fossil fuels and a rapid shift to renewable energy. Africa is leading the way through the Africa Renewable Energy Initiative and will work with all countries through the 2018 Talanoa Facilitative Dialogue on ways to scale up ambition and make the Paris goals a reality.”

Ambassador Colin Beck of the Solomon Islands added, “There are some things best left under ground. Fossil fuels is one of them. There should be no new expansion of fossil fuels as this threatens our efforts to put the world onto a pathway to limit warming below 1.5C.”

Climate leadership is being redefined: climate leaders don’t build pipelines, they don’t approve development or exploration of new fossil fuels the climate can’t afford, and they don’t pretend that we can continue to produce oil, coal, or gas for decades to come. We need leaders who will prove the possible: we need wealthy fossil fuel producing countries like Norway, Canada, and Germany, and regions like California to demonstrate that you can successfully transition from a dependence on producing last century’s dirty energy to thriving in today’s rapidly growing clean energy economy.

Our research has shown that potential carbon emissions from the oil, gas, and coal present in the world’s currently-operating fields and mines would take us beyond 1.5 or 2 degrees Celsius of warming. For the world to stay within the Paris climate limits, new fossil fuel production must be halted. This requires stopping development or exploration of new reserves, and stopping building of any new infrastructure, including coal mines, export terminals, pipelines, frack wells and offshore platforms.

If countries and corporations continue to expand the pool of developed reserves, it can do one of only two things: lock the world into catastrophic levels of climate change, or force us to make an abrupt about-turn at some later date; a chaotic, sudden leap that tears apart economies and throws millions of people out of work.

The sane choice is straightforward: to begin a managed decline of fossil fuel production, with a just transition for workers and communities at its heart. And that process must recognise that some countries must go further, faster: those whose economies would be least disrupted by moving away from fossil fuels, and that have the means to act first and fastest. And it must urgently protect the rights of communities that have been on the frontlines of fossil fuel production.

We are now at the last moment where we still have an opportunity for an orderly and just transition to clean energy, a managed decline of the fossil fuel industry that avoids not only the worst dangers of climate change, but also the social and economic costs of a sudden and wrenching unmanaged decline of the industry. The time for action is now.