Expanding Subsidies for CO2-Enhanced Oil Recovery: A Net Loss for Communities, Taxpayers, and the Climate Click to download the analysis 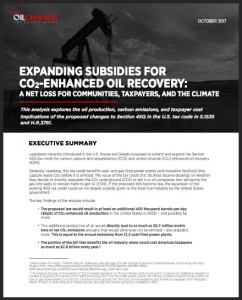 Generally speaking, this tax credit benefits coal- and gas-fired power plants (and industrial facilities) that capture waste CO2 before it is emitted. The value of the tax credit that facilities receive depends on whether they decide to directly sequester the CO2 underground (CCS) or sell it to oil companies that will pump the gas into wells to recover hard-to-get oil (EOR). If the proposed bills become law, the expansion of the existing 45Q tax credit could be the largest subsidy given to the fossil fuel industry by the United States government.

The key findings of the analysis include: