Buried within the Obama Administration’s midnight regulations that permanently withdraw parts of the Arctic Ocean from oil drilling lease programs and reforms of the federal coal leasing program, is an emerging policy theme first introduced in the context of the Keystone XL pipeline decision. That policy — a climate test — seeks to align energy decision-making with energy production scenarios that would help the U.S. to meet its internationally agreed climate goals of limiting warming to well below 2°C and aiming for 1.5°C.

In the context of the Arctic decision, the Obama Administration cited the fact that the country must be well on its way to eliminating its oil use by the time any oil produced in the Arctic Ocean might make its way to market. In other words, if we assume success in meeting our climate objectives, Arctic oil has no market.

In the case of the coal leasing program reforms, one option put forward by the outgoing Obama Administration assesses whether federal coal leasing fits within a U.S. carbon budget. Combined with the decision to reject the Keystone XL pipeline in 2015, these three decisions indicate a clear trend toward a climate test for energy decision-making as the Obama Administration came to an end.

One could have hoped that, with the proper public pressure, a Clinton Administration would have continued that trend and standardized it into a robust cross-governmental policy. Of course, that is not to be, and every indication is that the Trump Administration will seek to roll back climate and environmental policies rather than push them forward.

That said, all is not lost for the climate test. A climate test could be applied at all levels of government, including at the state level. One state where such a policy appears ripe for formulation is California.

In the wake of the election, Governor Jerry Brown has come out swinging, saying that he intends to push forward with climate policies in California regardless of what the federal government pursues. Of course, in many ways California has been at the cutting edge of climate policy for years, and it is clear that in Governor Brown’s final two years in office he intends to cultivate a defiant climate hawk legacy. One way he could burnish that legacy is to implement a robust climate test for the state.

Governor Brown has been criticized for resisting any efforts to limit fossil fuel extraction and infrastructure in California. An aggressive anti-fracking campaign has been ongoing for several years, and residents in the Central Valley have been crying out for even longer to limit their exposure to harmful oil production in their backyards. Governor Brown has consistently rebuffed such efforts to limit extraction in the state, pointing to state policies to limit oil demand as sufficient to meet the state’s climate goals.

Oil Change International has pointed out on numerous occasions why a demand-side-only climate action plan is insufficient, and California is no exception. Particularly in the context of a Trump Administration intent upon expanding fossil fuel extraction wherever possible, a robust climate test in California could be a critical and symbolic push back against Trump’s backwards policies.

According to data from the Rystad Energy UCube, there is less than 6 billion barrels of liquids remaining in currently producing assets. Rystad currently finds no liquids reserves under development. This means that a combination of the recent oil price slump and the limited and generally high priced oil remaining undeveloped in California has already brought new development to a standstill.

The orange area is ‘Undiscovered’, which includes resources that Rystad expects could be discovered and produced. Note that all of these reserves are quantified according to what Rystad considers economically viable under its current oil price projection. That projection currently sees U.S.oil prices (WTI) rising to $86 per barrel (2016 dollars) by 2020, but this is not enough to trigger development of more expensive oil in California. 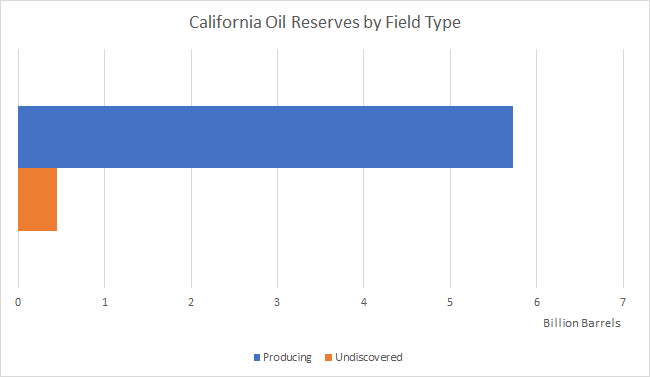 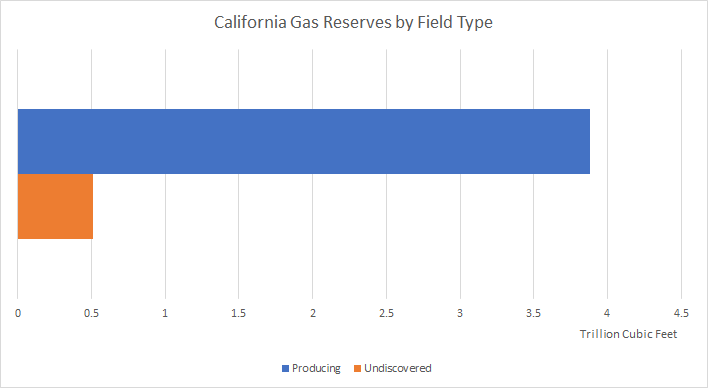 In the context of the Trump presidency and his cabinet full of oil industry allies, Governors and other elected officials around the country are going to be called upon to go above and beyond what they’ve already been pursuing. In the case of climate change, policies to reduce fossil fuel demand and emissions within the state of California are simply not enough to show the appropriate resistance to the fossil fuel renaissance that Trump and his allies would like to pursue. Imposing fossil fuel extraction limits, such as through a climate test, would be an important symbolic effort to push back.

Governor Brown wants to be a climate leader and at the forefront of opposition to Trump climate denial. Implementing a climate test in California would be an excellent way to lead that fight.