Today is the third anniversary of the tragic oil train explosion in Lac-Mégantic, Quebec. To commemorate this disaster, thousands of people will protest dangerous oil trains in their communities across North America, remembering the 47 people killed in Lac-Mégantic and mobilizing to prevent more tragedies.

Over the last three years, the call for a complete ban on oil trains has become stronger than ever. On July 6th, 2016, a petition was delivered to the White House by hundreds of organizations representing millions of Americans calling for a ban on all oil trains.

25 million people – one in 12 people in the United States – live and work in the potential “blast zones” of these trains in the U.S. alone. Oil train operators cannot definitively avoid terrible accidents, and when accidents do happen, the fires cannot be controlled. These are reasons enough to end this reckless transportation immediately.

However, the Obama Administration has chosen to prioritize the transport of oil and the profits of oil companies ahead of the safety of residents. Industry argues that a) crude-by-rail is critical to maintain U.S. oil production, and b) it is necessary to meet our energy needs. These justifications are no longer true, if in fact they ever were. It is high time to ban crude oil transportation by rail.

The latest data from the U.S. Energy Information Administration (EIA) – updated through April 2016 – shows that the movement of U.S. crude oil by rail has been in decline since October 2014. It has declined from nearly 1 million barrels per day to fewer than 350,000 bpd in April, a 65 percent decrease (Figure 1). 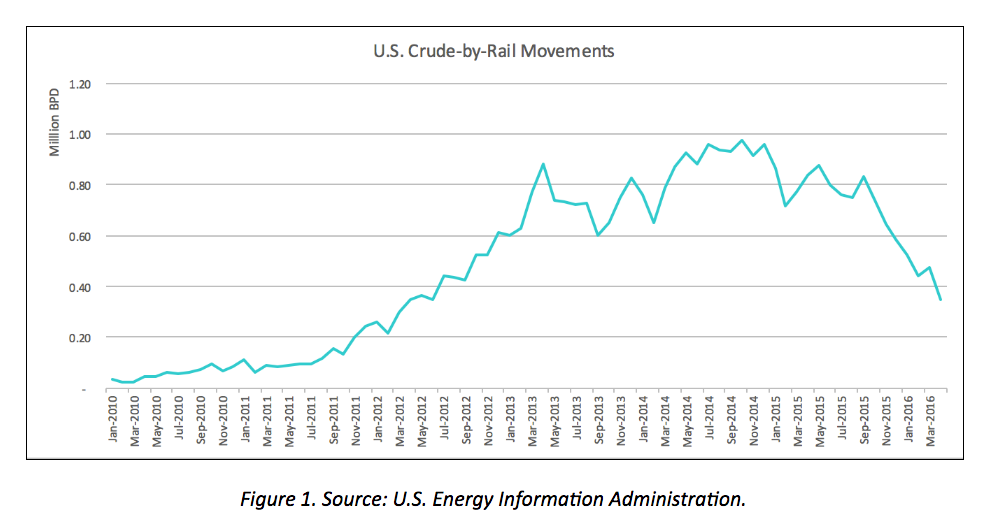 This decline is not only due to persistent low oil prices, but the decline in the difference between inland and coastal oil prices. If crude-by-rail economics made sense, we wouldn’t have seen a 65 percent decrease in just 18 months. The remaining traffic is primarily due to long-term contracts and trading between company subsidiaries.

Another false justification often presented to stave off a ban on crude-by-rail is that it is a critical part of the oil industry’s production strategy, and needed to bring oil to market. But as a percentage of production, U.S. crude moving by rail has plummeted from a high of 12 percent in April 2013, to a miniscule 3.9 percent (Figure 2). For oil being produced now, crude-by-rail represents a very small portion of the transport strategy, greatly weakening the argument that removing it would have negative impacts.

In fact, the latest petroleum supply data from the Energy Information Administration reveals that U.S. crude oil stocks currently exceed 1.2 billion barrels. That is the equivalent of eight years of current oil train crude at 425,000 barrels per day. It is very hard to argue that even more oil is needed in this environment. 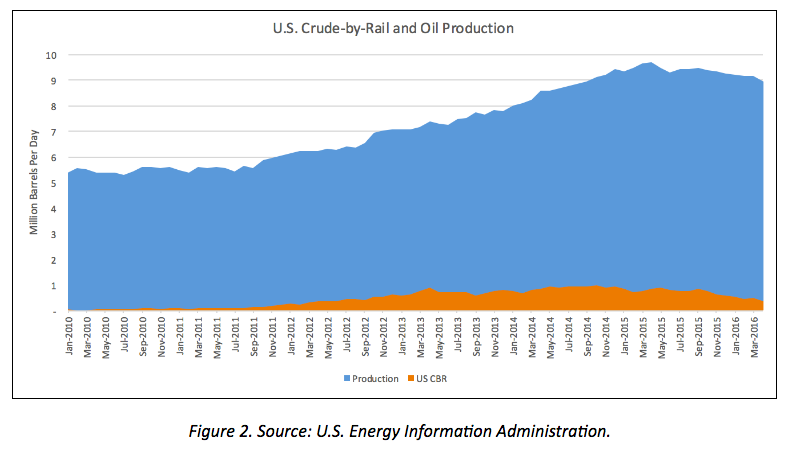 A final justification often attempted by industry is that crude-by-rail is necessary to meet our nation’s energy needs. But here again, the facts say otherwise: as a percentage of consumption, crude-by-rail represents even less of the market than for production. In May 2014, rail transported 6.1 percent of U.S. oil consumption, but today it carries a tiny 2.2 percent (Figure 3). And as noted above, the eight years’ worth of oil trains currently in U.S. crude stocks severely undercuts any argument that our nation needs to risk exploding crude trains for energy. 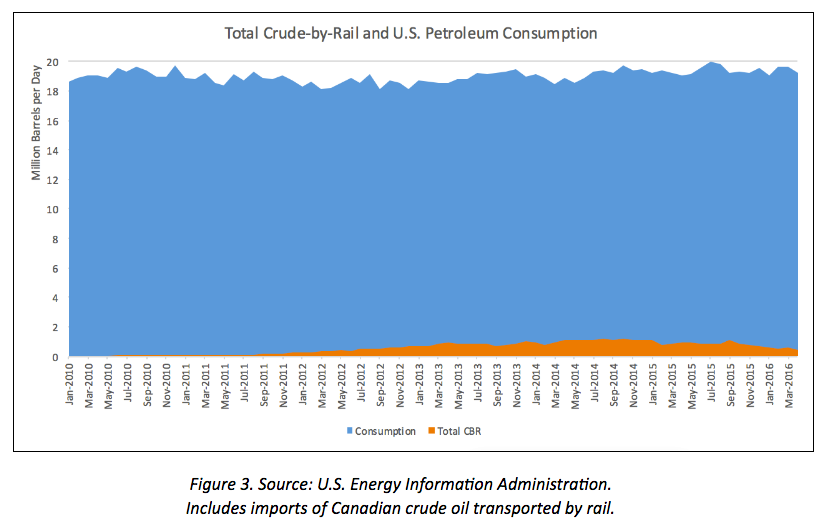 Crude-by-rail is declining in both use and importance because it is uneconomical. It now represents only a small fraction of transport for oil companies and the U.S. energy market. The ends no longer justify the means – in fact there are hardly any ends at all. And the risks of another catastrophe like Lac-Mégantic or last month’s oil train derailment and explosion in Mosier, OR, are simply too great.

In the interests of the security of 25 million Americans that live within the oil train blast zone, it’s time to ban the reckless practice of crude-by-rail today. No more excuses.