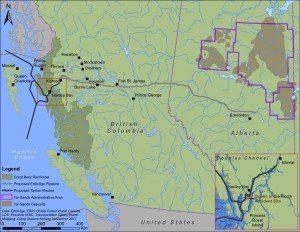 The political and economic reverberations of last week’s Canadian Court of Appeal judgement against the controversial Northern Gateway pipeline are continuing.

As environmentalists and First Nations continue to celebrate the decision by the Court to rule that the government had failed to adequately consult with Indigenous communities over the $7.9 billion pipeline, industry analysts are saying that the decision throws a huge question mark over the future of the tar sands.

The proposed pipeline would transport the dirty tar sands fuel from Alberta to an export terminal on the west coast of British Columbia. And without this route the tar sands could be in big trouble as the industry is running out of pipeline capacity to get its dirty fuel to market.

One oil and gas analyst, Abhishek Deshpande, of Natixis, told CNBC that he believes the court ruling “really impacts Canada’s oil industry big time”, before arguing: “If rejected, it will affect the ability to send oil to the West Coast, which is crucial to get it to China or other Asian markets.”

They are not the only ones who think this. Last fall, a new ground-breaking analysis by OCI and other environmental groups on pipeline capacity concluded that pipelines exporting the tar sands out of Alberta were 98 per cent full.

“Without major expansion-driving pipelines … there will be no room for further growth in tar sands extraction and tens of billions of metric tonnes of carbon will be kept in the ground,” wrote OCI campaigner Hannah McKinnon.

In light of the Court ruling, and with increasingly deserate options of getting the oil to the market, the analyst Abhishek Deshpande believes that the tar sands industry has no option but to reduce capital spending.

“If companies can’t send oil out, and the U.S. can only take so much…there’s only so much they can do,” he said. “It definitely puts Canadian oil sands projects at risk,” Deshpande added.

The federal Liberal government led by Justin Trudeau now has 60 days to decide if it wants to appeal the Federal Court’s decision. Earlier this year Trudeau said he opposed the pipeline, so people will be watching very carefully to see if he changes his mind.

Meanwhile the pressure is building on the Government from First Nations to scrap the project. Kitasoo Chief Doug Neasloss has now called on Trudeau to bin the pipeline altogether.