Yesterday Australian climate activists blockaded the world’s largest coal port and shut it down for several hours, leading to the arrest of 66 people.

The protest managed to stop millions of tonnes of coal being exported for a whole day in a hugely significant protest.

The action was part of the global #BreakFree2016 protests against fossil fuels, which saw a similar action last week in the UK when Reclaim the Power halted operations at the UK’s largest open coal mine in Wales.

Similar #BreakFree2016 actions are happening in a dozen or so other countries which will stretch over two weeks. The protests are targeting “some of the most iconic and dangerous fossil fuel projects on the face of the planet”.

But yesterday it was Australia’s turn. Yesterday’s protest targeted the port at Newcastle, some 160 km north of Sydney, where the country’s largest coal export port is located.

Some 2,000 activists tool part in the protests with hundreds of kayakers blockading the entrance to Newcastle harbour and others blocking the train tracks used to transport the coal. 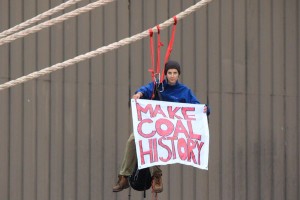 Also in evidence were the “climate angels”, who I had least seen leading the protest outside the Louvre in France during the recent crucial UN climate conference. They helped blockade the rail tracks.

It was a multi-generational protest, with the Police at one stage arresting a 94 year-old WW2 veteran, who was blockading the coal trains. 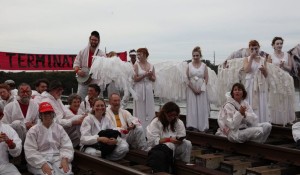 Others were protesting for the first time in their sixties. Burt and Layo Nathan of Coffs Harbour, said they were worried about the long-term effects of climate change.  “I think it’s just so obvious the damage that’s being done,” Layo Nathan said.

One of the protestors, Nicola Bowskill, who is a local resident said: “I’m really worried about climate change and I believe we’ve got to break free … and move towards 100% renewable energy”.

She added: “Newcastle is built on coal but it doesn’t mean that our future has to be built on coal. There is huge potential here.”

There is no doubt that the protests were successful. An editorial in the local Newcastle Herald, the voice of this coal town, warned that the coal industry is “losing is social licence to operate”.

“Whatever coal industry leaders think of the protests, they must realise that their industry is losing its social licence”, warned the paper: “Passing tougher anti-protest laws, as the state government has done, is not the answer when the public has such genuine and logical disquiet”.

An editorial such as this would have been unthinkable a year or so ago.

Momentum is now building for climate change to be on the agenda in the up and coming elections in Australia. “On a day when the election is going to be called, it’s sending a signal to our elected leaders that climate change is an election issue,” said Campbell Klose, from 350.org one of the organisers.