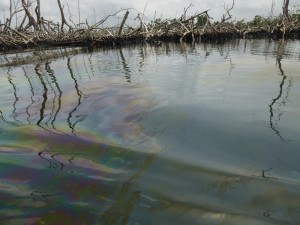 The serial offender Shell is being sued. Again. The oil giant finds itself in a court in London today for the second time in five years for its ongoing chronic pollution problems in the Niger Delta.

In January last year, Shell agreed to a $84m pay-out with residents from the Bodo community in the Delta for two oil spills. At the time, the communities were represented by the law firm Leigh Day.

But now a further two more communities are suing Shell and demanding that it cleans up its their land, also aided by Leigh Day.

Shell’s operations in the Delta have seen over fifty years of chronic pollution, community protests and state violence in which the oil giant colluded.

Although the conflict grabbed international headlines over twenty years ago when Ken Saro-Wiwa, the Nigerian playwright and activist was murdered along with eight other Ogoni, Shell’s pollution legacy continues.

The oil giant has made repeated promises that it will clean up its toxic legacy, but often these promises have proven to be baseless.

In 2011, in a landmark report the United Nations Environmental Programme (UNEP) examined pollution in Ogoniland and reported that “pollution from over 50 years of oil operations in the region has penetrated further and deeper than many may have supposed.”

They predicted that environmental restoration of Ogoniland could prove to be the “world’s most wide-ranging and long term oil clean-up”.

In response, Shell promised to clean up sites identified by UNEP as well as the wider Niger Delta community.

But they have failed to do so.

One of the communities now suing Shell, the Ogale, live in Ogoniland, and are mainly farmers or fishermen. HRH Emere Godwin Bebe Okpabi, the Paramount Ruler of Ogale, said: “Shell have polluted our land and our streams and drinking wells for years … No-one is listening to us, no-one cares. We hope at last this case will force Shell clean up at long last.”

The plaintiffs point to a report by human rights group, Amnesty International, which was published in November 2015, to mark the twentieth Anniversary of the murder of Saro-Wiwa and the other Ogoni nine.

The report argued that: “Claims by oil giant Shell that it has cleaned up heavily polluted areas of the Niger Delta are blatantly false”.

Last November, Mark Dummett, Business and Human Rights researcher at Amnesty International, who visited the Delta said: “By inadequately cleaning up the pollution from its pipelines and wells, Shell is leaving thousands of women, men and children exposed to contaminated land, water and air, in some cases for years or even decades.”

He added: “Oil spills have a devastating impact on the fields, forests and fisheries that the people of the Niger Delta depend on for their food and livelihood. Anyone who visits these spill sites can see and smell for themselves how the pollution has spread across the land.”

The other community to sue are the Bille community, who are mainly fishermen, who claim Shell should be liable for “failing to protect their pipelines from damage caused by third parties”.

The first hearing today will determine whether the claimants can sue Shell’s Nigerian business, known as Shell Petroleum Development Company of Nigeria, in London.

Daniel Leader, partner at Leigh Day said: “It is scandalous that four years after the UNEP Report Shell is yet to clean up its oil in either Ogale or Bille. Our client’s patience has now run out and we intend to force Shell to act since it is clear they have no intention of doing so on their own.”

Leigh Day clearly sees this as yet another test case and whether oil spill litigation “goes international”.

If it does, then Shell and many other companies could face years of litigation for their reckless behaviour over decades in numerous countries.