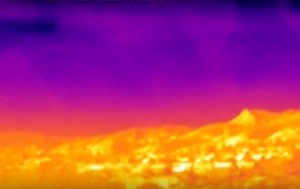 It is increasingly being seen as America’s worst environmental disaster since BP’s Deepwater Horizon blowout in 2010 and has led to thousands of people being evicted from their homes.

However, the massive methane leak from a natural gas storage well in California, which has been occurring since last October, could well be months away from being fixed.

The leaking gas is coming from the Aliso Canyon Gas Storage Field, the largest underground methane storage facility in the region and the fifth largest in the US.

The storage facility is located near the community of Porter Ranch, some 40 odd kilometres from Los Angeles. The gas is stored here before being shipped to customers in LA.

The leaking well, which is owned by the Southern California Gas Company, or SoCal for short, has been emitting the highly potent greenhouse gas methane for months forcing the residents of Porter Ranch to flee their homes.

Two schools have been forced to close too, with local residents suffering from headaches, nausea and nosebleeds. Some have experienced more severe symptoms such as bleeding from the eyes and the gums. Some 2,200 residents have been relocated. A further 7,000 people are waiting to be moved too.

An estimated 150 million pounds of methane has been emitted since October. This is equivalent to 25 percent of daily greenhouse gas emissions in the state, and has been likened to the same amount of emissions as driving 160,000 cars for a year or consuming 90 million gallons of gas.

Because the gas is invisible it cannot be seen by the naked eye, but infrared images show clouds  of methane leaking from the site (see image).

The cause of the original leak remains unknown, and efforts to stem the flow have become as farcical as those of the Deepwater Horizon. At first local residents were told by the company that everything was OK. It was only days later that they were officially informed that there was a major leak.

Original efforts to plug the leak with a mixture of brine and mud failed and the company is now drilling two relief wells to try and seal the leaking well.

But that could take months the company has now conceded, with the drilling of the second well not due to commence until January 20th. It is not likley to be finished until late February or early March.

The leak is causing outrage. “The amount of methane and natural gas that’s coming out of the Aliso Canyon Facility really is probably one of the largest volumes of gas ever recorded from a single leak,” says Tim O’Connor, an oil and gas specialist with Environmental Defense Fund.

One Porter Ranch resident who says the methane is making her sick is Laurie Rosenberg. “I’ve had migraine headaches … itchy eyes, and runny nose 24/7,” she says.

Another local resident, Christine Soderlund, adds “I’ve been nauseous. I’ve felt lethargic. My kids have had nosebleeds, they’ve had headaches. “It’s surreal. We are a living science experiment I believe.”

Erin Brockovich, the celebrated consumer advocate, whose story was told in the Oscar-winning film starring Julia Roberts, has been helping local residents.

“It’s been going on for months. It’s going to continue to go on for more months”, says Brockovich: “It’s outrageous. It’s frightening, at its best. It’s horribly concerning to this community. They are sick. And the impacts keep going on. And that’s what makes it so catastrophic”.

Jason Marshall, chief deputy director of the California Department of Conservation, which regulates California’s oil and gas wells believes the accident will force regulators to change industry practices. “We need to ask questions about well construction and operation,” he told the Los Angeles Times. “There are going to be changes in how gas is stored,” he argues.

Ironically later this year the U.S. Environmental Protection Agency will issue long-awaited regulations to control methane emissions from the oil and gas sector.

In the light of this disaster, surely they will now have to be reviewed and strengthened.