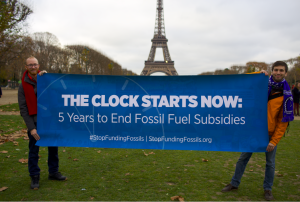 In the end, after two weeks of tortuous and exhausting negotiations in Paris, the UN agreement on climate reached on Saturday has been hailed as “historic, durable and ambitious”.

But we should remember it has taken twenty years of fighting huge political inertia and the oil industry’s multi-million dollar denial and delay campaign to get to this point.

For many the reaction to the agreement was a boiling mix of different emotions, but the first one was relief that a deal had been struck, as at one stage it looked like it had slipped beyond reach during the final tense few hours.

But there was palpable anger that the text itself was not strong enough, no matter what the headlines and the politicians say.

Kumi Naidoo, Executive Director of Greenpeace International perhaps summed it up by saying: “Today, the human race has joined in a common cause. The Paris agreement is only one step on a long road and there are parts of it that frustrate, that disappoint me, but it is progress. The deal alone won’t dig us out of the hole that we’re in, but it makes the sides less steep.”

Although the deal means the end of the fossil fuel era comes closer, as ever with international agreements such as this, the devil is in the detail.

First the good news. That there was an agreement at all, with some parts being legally binding and with both developed and developing nations required to limit their emissions to 2C with an aspiration of 1.5C.

For many just having mention of striving for 1.5C was a significant victory.

And maybe it is, before you read the bad news. Depending on who you believe, the current caps on emissions will lead somewhere to a level of warming of somewhere from 2.7 to 3.5C above pre-industrial levels.

As Bill McKibben notes, those kind of temperatures mean a “broken planet,” and is potentially 1.5C above any safe limit. And not all is legally binding, so could potentially be reneged on by any future government; which is especially pertinent to the United States.

A sobering analysis of the success – or other – of the talks was given by Jess Worth and Danny Chivers from New Internationalist, who concluded that “the Paris Agreement is a disaster for the world’s most vulnerable people. The headline target of 1.5 degrees and eventual decarbonization look good on paper but there’s no sign that governments are willing to make them a reality yet”.

Climate scientists were critical too. The Godfather of climate science James Hansen replied by saying the UN process and its agreement was a “fraud really, a fake,” before adding that “It’s just worthless words. There is no action, just promises. As long as fossil fuels appear to be the cheapest fuels out there, they will be continued to be burned.” 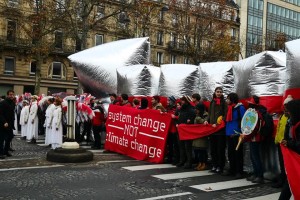 And whether the fossil fuels continue to be burnt, will depend as much on us, as any politician. And let us not forget we are the many, not the few.

So maybe when we write about the legacy of Paris, the historians should focus not so much on the delegates and text that was signed in a conference hall on the edge of Paris, but on the tens of thousands of protesters and activists who made their voices heard outside the conference hall.

This has been a year like no other for victories for the climate movement: the abandonment of the controversial Keystone XL pipeline; Shell putting out of the Arctic; the American Arctic being put off limits, for now; and the New York Attorney General Office’s investigation into Exxon’s climate denial misinformation.

And so it is with these victories as much as the deal in Paris, that true momentum is with the climate justice movement.

“It is what happens now that counts” says Asad Rehman, from the Global Campaign to Demand Climate Justice. “It’s what happens on Monday that’s the most important thing. Do we return to our capitals, do we build a movement, do we make sure our countries are doing their fair share? Do we stop the dirty energy industry, do we invest in new climate jobs, do we invest in community-owned decentralized energy?

There are immediate battles ahead. The US looks like it is about to overturn the decades long crude export ban. Before the ink is even dry on the Paris agreement comes news that the UK is pushing to have air pollution levels relaxed.

And then of course is the thorny issue of fossil fuel subsidies. Governments cannot hope to keep to 1.5C at the same time as spending hundreds of billions on subsidies to produce more oil and gas. Moves could be made at the World Trade Organization meeting in Kenya this week to phase out fossil fuel subsidies, but it is more likley to be business as usual.

Indeed, as people head home and regroup, it is worth noting what Steve Kretzmann, the Executive Director of Oil Change International said over the weekend: “The fossil fuel industry and their corporate and state allies are still very, very strong, but their Cloak of Inevitability has been tattered and torn. We see you, fossil fuels, and we are coming.”