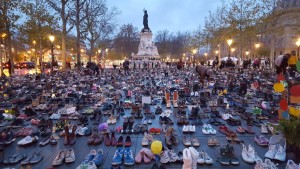 All around the world, in cities, towns and villages yesterday hundreds of thousands marched for the climate on the eve of the most important UN conference on the subject that has ever taken place.

People power was everywhere across the planet, with everyone united in their desire for strong action on climate.

Some 60,000 people marched in Melbourne; 50,000 people in London; some 40,000 in Sydney; 25,000 in Ottawa; and 20,000 in Rome and Madrid. In total over 600 million people marched in over 175 countries across the globe from Sydney to Seattle, from New York to New Zealand, from Sao Paolo to Portugal. In many countries records were set for the number of people on the streets.

The protests were not all huge, but all were powerful. In Kenya they marched across the Equator. In Yemen 70 people held a rally despite continuing air-strikes.

In a poignant act of symbolism, in Paris some 10,000 shoes lined the Place de la Republique after the climate march was banned (see picture). Amongst the shoes were pairs donated by Pope Francis and Ban Ki-moon. At one stage women dressed as angels stood silently amongst the shoes with small banners. “Climate justice, no excuses” read one. “Coal kills”, read another.

“It’s an incredible monument to the voices that have been silenced but also to that hope for action that comes out of this city,” said Emma Ruby-Sachs, acting executive director at Avaaz, which helped organise the shoe campaign.

Some 3,000 demonstrators also formed a human chain along the route through central Paris from the Place de la Republique to Place de la Nation, where the now banned march should have taken place. There was a symbolic gap in the chain at the Bataclan concert hall, where 89 people were killed earlier this month. One placard on the chain read simply: “Keep fossil fuels in the ground”.

In London, the march was led by indigenous groups on the frontline of the climate change struggle. On stage a group of Sámi from Sweden sang.

There were the usual speeches. Craig Bennett, chief executive of Friends of the Earth, said: “This is a fantastic display of people power with thousands taking to the streets to demand urgent action on climate change.”

Actor and Greenpeace supporter Emma Thompson added, whilst marching in London, “Unfortunately we live in a world which is absolutely in the pockets of fossil fuel companies.”

Whether the world leaders are listening will soon become apparent. At noon today they will start speaking at the Le Bourget conference centre on the edge of Paris. Many people will want to hear what President Obama has to say and whether he can galvanise others into a legally binding agreement.

Speaking on the eve of the talks Obama said: “I’m optimistic about what we can achieve – because I’ve already seen America take incredible strides these past seven years.”

Whether this optimism is justified will become all too clear over the next two weeks. All too often in the past the UN climate talks have descended into disappointment, farce and failure.

We cannot afford for this to happen again.