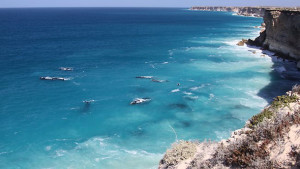 In a major set-back for the oil giant, BP’s highly controversial application to drill in one of Australia’s last great wilderness areas, the Great Australian Bight, has been rejected for falling short of environmental standards.

The Bight is seen by the oil industry as a potentially huge new frontier, with a similar geology to the Niger and Mississippi Deltas.

In its application, the oil company had to outline how it would manage the risk of oil spills as well as addressing wider concerns of the environmental impact.

The company’s critics were quick to highlight how flawed BP’s initial application had been. According to the Wilderness Society, which has been campaigning vigorously against the oil giant’s plans, BP submitted an “inadequate application”.

The Society has long argued a spill in the Bight would threaten South Australia’s 442 million Australian dollar fishing industry and A$1 billion coastal tourism industry, as well as threatening endangered species.

The Society’s South Australia’s director Peter Owen said: “The Great Australian Bight is a haven for whales, boasting the world’s most significant southern right whale nursery as well as many humpback, sperm, blue and beak whales.”

Despite the rich wildlife, Owen argues that “It doesn’t appear that BP even completed an oil pollution emergency plan or a comprehensive risk assessment”.

Others too have weighed in to criticise BP’s application. South Australian independent senator Nick Xenophon said the decision by the regulator showed there were “significant and unacceptable risks in the proposal” to drill in what he called “a priceless Australian asset”.

“This decision shows that what BP wants to do is hugely complex and risky and needs to have proper oversight and scrutiny,” he added.

Xenophon is now pushing forward legislation that would give the Commonwealth the final say on drilling in the Bight. “It appears to be an accident of history that NOPSEMA has no ministerial oversight for decisions as vital as letting exploration drilling into the Great Australian Bight,” he argues.

His move is likely to be supported by the Greens, who are worried about BP’s “shocking” environmental record, such as the Deepwater Horizon spill five years ago in the Gulf of Mexico.

The Wilderness Society is also now calling on BP to drop its plans: “BP should take this opportunity to drop its plan to drill in the Great Australian Bight especially after it released a statement last month saying it supported action on climate change,” says Peter Owen.

They are likely to be disappointed though as NOPSEMA has said that BP can resubmit a new proposal, something which BP has indicated it will now do.

In a statement BP said it would “work hard and take the time to demonstrate we have got our Environment Plan right.”

So the fight to save the Bight is far from over.