We expect that most of our readers are aware that oil prices are way down this year and that the new OPEC strategy may mean that it may be several years until we see $100 per barrel oil again, if ever. The impact on gasoline prices in the U.S. is also easily garnered from the price boards we see every day on the streets. But how quickly and dramatically U.S. consumers have responded to the price crash has taken some time to come through in the data. With the end of the summer driving season, that response now seems pretty clear.

Gasoline demand in the U.S. is seasonal, with a regular sustained peak in the summer months and a dip in the winter despite brief spikes around the winter vacations. So with the summer of 2015 well and truly over, we thought it’s time we looked at this summer’s demand spike.

In the figure below we averaged gasoline demand for June through August from 2004 onward; 2004 being when oil and gasoline prices really started to take off. The price data is for wholesale gasoline at the New York Harbor and is also averaged for the 3-month period.

Year-on-year growth in 2015 is a whopping half-a-million barrels per day. This is the largest movement in either direction not only for this period but since at least 1991, which is as far back as the EIA dataset we used goes. It is more than twice as large as the decline in demand that occurred in 2008, following the highest gas price rises since the Arab oil embargo. At over 9.5 million barrels per day it is just a handful of points away from the 2007 gasoline consumption peak, rolling back what we thought were efficiency gains made in the past eight years. 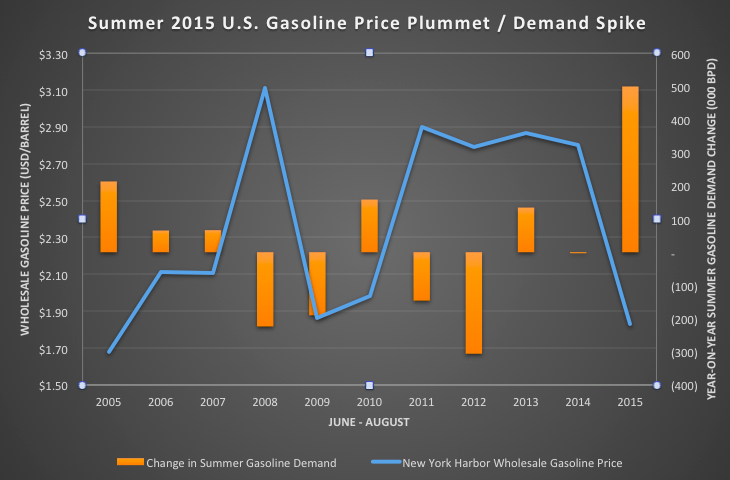 The causes of the spike seem to be an almost perfect storm of factors; primarily the confluence of a recovering U.S. economy, low interest rates and an historic oil price drop. With more money in their pockets, easy credit and low gas prices, U.S. drivers returned to the showroom in high numbers looking for large SUVs and trucks and also drove record miles. While the mileage increase may look less dramatic when adjusted for population growth, the U.S. still faces enormous challenges in decarbonizing its transport system.

The trend is only likely to continue if prices stay low, in particular because the U.S. continues to lack a coherent policy on oil. While CAFE standards may mandate a more efficient fleet in the showrooms it does not in of itself encourage consumers to choose the most efficient vehicles. Likewise, car-centric planning and limited transit options leave little choice for millions of Americans but to drive to where they need to go. Meanwhile, low prices are yet to make much of a dent on the burgeoning fracking boom as producers cut costs, focus on the richest wells and even get a break on reigning in the destructive and wasteful practice of flaring natural gas.

Without a coherent set of policies on oil supply and demand, the U.S. seems set to roll back the last decade of efficiency gains and, absent a dramatic change in direction, face a future of rising prices and worsening climate and community impacts from excessive oil production and consumption.