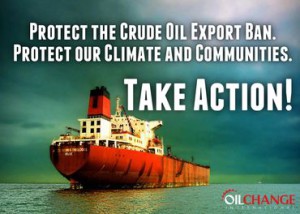 If nothing else, President Obama’s energy and climate policy is certainly contradictory. Although desperate to have a positive legacy on climate change, he has recently been criticised for allowing Shell to drill for oil in the Arctic just days before visiting the Arctic himself to warn about global warming.

In contrast, his Administration is standing firm on the crude export ban. Numerous environmental groups have long campaigned against lifting the ban, whereas the oil industry, led by firms such as Continental Resources and ConocoPhillips, has been pushing for the ban to be listed for months, if not years, now.

Regular readers of this blog will know that Oil Change International has long argued against lifting the ban. In April this year, OCI’s Director Steve Ketzmann testified before the House of Representatives’ Committee on Foreign Affairs’ Subcommittee on Terrorism, Nonproliferation, and Trade, regarding the ban.

Three months later, OCI released a briefing entitled, Lift the Ban, Cook the Climate: Why Eliminating the Crude Export Ban Fails the Climate Test, detailing why Congress and the President should stand up to current efforts by the oil industry to eliminate the ban on crude oil exports.

And just last week, in response to the House Energy and Commerce Energy and Power Subcommittee’s approval via party-line voice vote of H.R. 702, a bill that would lift the existing ban, David Turnbull, Campaigns Director for OCI, said: “The only thing this vote proves is that Big Oil continues to maintain its deathlike grip on so many of our elected representatives in Washington DC.”

He continued: “Eliminating the crude export ban would not only hurt the many communities facing dangerous oil extraction and transportation in their backyards, but also our climate, as the industry digs up unburnable oil at an even faster clip. The only beneficiaries of gutting this law are the Big Oil Executives seeking to pad their profits.”

Well it seems that Obama agrees on this issue with OCI.

Yesterday, House Majority Leader Kevin McCarthy, announced he will push for a vote to relax the ban later this month when he spoke at a speech before the Houston-area Chamber of Commerce, which is largely funded by the oil industry.

“If there was ever a time to lift the oil export ban, it’s now,” McCarthy said. “Lifting the oil-export ban will not only help our economy, it will also bolster our geopolitical standing.”

In response, Obama’s spokesperson Josh Earnest remarked: “We wouldn’t support legislation like the one that’s been put forward by Republicans.”

He then accused McCarthy of trying to “cozy up to oil interests” and added: “The one thing that I would note is that this policy announcement is being made by Leader McCarthy in front of an organization in Houston that is largely funded by four or five of the biggest oil companies in the United States.”

Earnest finished by saying: “So it is pretty clear once again where Republicans in Congress and their political benefactors stand when it comes to their energy policy priorities.”

Earnest then suggested that McCarthy should instead advocate the ending of billions dollars of subsidies for the oil industry and the money invested in renewable energy instead.

Although the legislation may pass in the House, the Republicans may find it harder to pass it in the Senate though. “It makes no sense to export our oil abroad when we still import millions of barrels of oil a day and consumers are saving at the pump because of discounted U.S. oil prices,” Senator Edward Markey, a Massachusetts Democrat, argues.