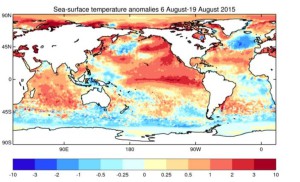 In the run up to the crucial UN climate talks in Paris in December this year, it goes without saying that the climate sceptics and deniers will be out in force trying to scupper any meaningful potential deal.

One of the arguments in their discredited and ever-decreasing armoury is that the earth is no longer warming, as there has been a slow-down in rising air temperatures.

This has become known in the global warming debate as a “hiatus”, which many believe has been caused by the oceans absorbing much of the carbon dioxide, as part of regionally fluctuating climate cycles.

And now research released this morning by the UK’s Met Office suggests that the so-called pause is coming to an end as the global climate has reached a turning point where we will see rapidly rising temperatures over the next few years.

Indeed, the Met Office is predicting that the next two years could be the hottest on record globally, after new research found that the Earth’s average surface temperature this year has reached record levels.

According to the Met Office, these changes suggest 2015 and 2016 are likely to be “very warm globally”, with record breaking temperatures.

There are various issues at play, including increasing CO2 levels, long-term natural ocean trends and the El Niño Southern Oscillation, known as ENSO for short.

In addition, both what are known as the Pacific and Atlantic natural climate cycles are reversing, which in turn will also increase manmade global warming. However, depending on how these two play out, Europe may have cooler summers for a while.

“We will look back on this period as an important turning point,” argues Professor Adam Scaife, the lead scientist on the Met Office analysis. “That is why we are emphasising it, because there are so many big changes happening at once. This year and next year are likely to be at, or near, record levels of warming.”

Head of the Met Office Hadley Centre, Professor Stephen Belcher adds: “We know natural patterns contribute to global temperature in any given year, but the very warm temperatures so far this year indicate the continued impact of increasing greenhouse gases. With the potential that next year could be similarly warm, it’s clear that our climate continues to change.”

Leading climate scientists are dismissive of the so-called “hiatus” anyway. Professor Rowan Sutton from the University of Reading near London in the UK, who reviewed the Met Office report, said: “None of the debate around the pause has changed our long term understanding of greenhouse-gas-driven climate change. That is the most fundamental point for Paris. The fact that 2014, 2015 and 2016 look like being among the very warmest years on record is a further reminder about climate change.”

Indeed, the Met Office analysis is a further reminder to the politicians to agree a comprehensive deal on climate at the Paris talks.