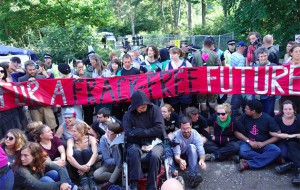 The fracking debate in the UK is set to intensify this week, with press reports that the British government is set to announce the winners of a whole raft of new licenses that could see up to half the country opened up to fracking.

As the Government finalises the details of the new licenses, the pro-fracking business community is lobbying hard to relax the planning constraints even further to make it easier and faster to frack.

The frackers are still reeling from the landmark decision in June this year by Lancashire Council to reject a planning application by fracking giant Cuadrilla to frack eight wells in the North West of the country.

Cuadrilla has now appealed that decision, but last week it was revealed that the appeal could take 16 months to go through the planning process.

It will more than likely end up being a decision for Greg Clark, the Secretary of State for Communities and Local Government, who may well over-ride local democratic decisions and allow the fracking.

It would be no surprise if Clark just trounced local democracy as part of the Government’s ever increasingly fervent pro-fracking agenda. Indeed, in the last few weeks, the blatant anti-Green agenda of the Conservative Government has become clear.

Now that the Conservatives are no longer in coalition with the Liberal Democrats, they have shown their true colours by announcing that fracking is a “real priority,” whilst ripping up loads of green policies.

Late last week, the heads of ten prominent British environment and conservation groups representing millions of people, wrote to UK Prime Minister David Cameron outlining their “major concern” at the cancellation or weakening of 10 green polices since the General Election in May this year.

For example, in the last couple of months, the UK government has ended subsidies for onshore wind and solar power, increased taxes on renewable energy, axed plans for zero carbon homes, and closed its flagship energy efficiency scheme without a replacement.

Some influential voices are saying that the last few months has been the worst for environmental policy in 30 years.

But still the pro-fracking business community is not satisfied and wants to completely over-ride local democracy and fast-track fracking.

The head of the business lobby group, the British Chambers of Commerce, is now arguing that Britain will “end up a living museum” unless local and national anti-fracking groups are thwarted.

Longworth is quoted in yesterday’s papers as: “It is useless trying to solve problems in the sector unless we resolve planning” adding “There has to be an over-ride in the national interest or we will end up a living museum like Greece.”

Both the British Government and Longworth fail to understand that they cannot just over-ride the local planning process without major consequences for democracy.

As Hannah Marti, a Greenpeace Energy Campaigner, argues: “The Government needs to recognise the fracking fight for what it is; local people defending their right to a clean, safe and sustainable future for themselves, and for the whole country.”