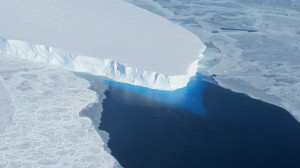 If there is one name synonymous with climate science it is Dr. James Hansen, seen as the Godfather of the science.

It was Hansen, the former NASA scientist, who famously told Congress back in 1988 to “stop waffling” because “the greenhouse effect is here and is affecting our climate now.”

Over the following decades Hansen, who is often seen as being ahead of the curve on the understanding of the science, has issued increasingly urgent calls to address climate change.

The climate scientist has long believed that sophisticated climate models still underestimate the impact rising temperatures will have on melting glaciers, which have the potential to raise sea levels by huge amounts, such as the Greenland or West Antarctica ice sheets.

And now along with sixteen other colleagues, he has published his most alarming prediction yet in the publicly peer reviewed journal Atmospheric Physics and Chemistry, entitled: “Ice Melt, Sea Level Rise and Superstorms: Evidence from Paleoclimate Data, Climate Modeling, and Modern Observations that 2°C Global Warming is Highly Dangerous’.

Hansen, who is now an adjunct professor at Columbia University’s Earth Institute, calls it his most important paper yet.

He is now warning that there could be “sea level rise of several meters” before the end of the century unless we cut carbon dioxide emissions much faster than previously contemplated.

The paper argues that current computer models underestimate the time it may take for the vast huge Antarctic ice sheets to melt. They argue that the time period over which the amount of ice loss could double, the so-called “doubling time”, could be as short as 10 years.

“If the ocean continues to accumulate heat and increase melting of marine-terminating ice shelves of Antarctica and Greenland, a point will be reached at which it is impossible to avoid large scale ice sheet disintegration with sea level rise of at least several meters,” the paper contends.

It goes without saying that a sea-level rise of this magnitude would leave many coastal regions in Europe, the Eastern United States, Bangladesh and China as well as cities such as New York, London, Mumbai and Shanghai uninhabitable.  “Parts of [our coastal cities] would still be sticking above the water,” Hansen says “but you couldn’t live there.”

Whilst there have been many dire predictions before, if these climate scientists are right, then tens of millions of people – from rich to poor – will be affected.

Just months before the crunch climate talks in Paris, Hansen is also widely rubbishing the internationally agreed 2 degree Celsius temperature rise limit, saying it was “pulled out of a hat” and was not the “guardrail” that many believe it to be, but was actually “highly dangerous.”

As one commentator notes: “Hansen’s study explodes what has long been the goal of conventional climate diplomacy … President Barack Obama and other world leaders must now reckon with the possibility that the 2 degrees goal they affirmed at the Copenhagen summit in 2009 is actually a recipe for catastrophe”.

The problem is that even getting an international agreement to limit emissions to 2 degrees is proving extremely difficult, with the UN Paris meeting seen by many as the last chance saloon.

“I think that the major implication of that will be that we hand young people a climate system where it’s not possible to avoid a large sea level rise,” argues Hansen, before adding some words of hope in that that the world “could actually come in well under 2 degrees” but only if we impose a “simple, honest, price on carbon emissions.”