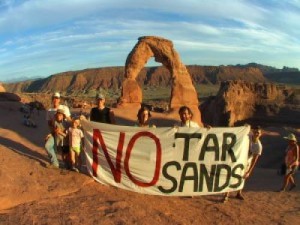 State regulators in Utah yesterday heard arguments both for and against the country’s first billion dollar tar sands mine, which is currently being constructed in the east of the State.

Ostensibly the meeting was to evaluate whether the company involved, US Oil Sands, should be allowed to expand its current site by hundreds of acres. But dozens of protesters turned up to vent their opposition to the mine, including its impact on groundwater.

For the last seven years state regulators have been claiming that there is no risk to groundwater from the mine.

But one of those speaking yesterday was University of Utah Geology Professor, Bill Johnson, one of the leading experts on groundwater in the US.

Johnson has serious academic credentials, having published over 85 peer reviewed articles. He serves as a reviewer for more than eighteen environmental science journals, as well as on multiple National Science Foundation panels.

The geology professor is opposed to the Utah tar sands mine and “has spent the past two years studying the hydrology of PR Springs and is ‘100 percent’ certain the ridge top where U.S. Oil Sands would dig is hydrologically tied to many of the perennial springs watering nearby canyons.”

Johnson and his team recently published a scientific paper which disputed the state’s regulators conclusions that there is no risk to groundwater. The Professor is highly critical of the company and state regulators after US Oil Sands drilled 180 holes in the project area to see whether there was a risk to groundwater. However the holes were drilled at twice the depth to where the company would be mining.

Utah State officials then used the company data to argue that the risk to groundwater from the mine was “minimal.”

This exacerbates Johnson. “Unfortunately, every decision that has been made to date is the (same) as looking out at the sky today and saying it is impossible that water can fall from the sky, and I find that infuriating,” he argues. “The conclusions are based on data that was never intended to find a hydrological resource.”

Yesterday’s hearings were heard in front of the Utah Division of Oil, Gas and Mining director John Baza. Johnson was once again blunt in his assessment of the groundwater risk: “There is no doubt”, he told Baza, “if I put the results in front of 100 hydrologists, they would say there is a path [for water] from the ridge tops to the canyon bottoms.”

Baza is expected to make a ruling in the next ten days. Let’s see if he listens to the eminent Professor.