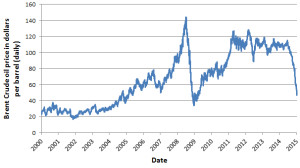 A year on from the start of one of the biggest oil price plunges in recent history, it seems there is going to be no let-up in the turbulence caused by the price fluctuations.

Reuters is reporting this morning that “further price turbulence looks almost certain” as there is still too much crude on the market.

“We’re not in the clear as far as the supply-demand balance”, Vikas Dwivedi, global head of oil and gas strategy at Macquarie, tells the news agency. “In some ways, we think this whole situation is getting worse.”

The oil price fall continues to have a major knock-on effect on the Canadian tar sands and North American shale industry.

Last month, Oil Change International published a new analysis on how, due to the price fall, some 1.6 million bpd of planned tar sands expansion was effectively on life support as 39 planned projects were delayed or on hold.

Today’s Financial Times picks up the story and reports how there are now “leaner times for Canada’s ‘Fort McMoney’, as the tar sands capital, Fort McMurray, is known locally.

“With the collapse in crude prices, energy companies have suspended or cancelled billions of dollars in new projects, thousands of workers have lost their jobs and voters ousted the party that ran the provincial government for 44 years”, the paper reports grimly.

Capital spending in the country’s oil and gas industry will total C$45bn (US$37bn) this year, which is 40 per cent lower than in 2014. The paper quotes Rich Kruger, chief executive of Imperial Oil, who told investors recently “In a very short time our world has changed, and changed dramatically.”

As the companies look to make savings and make cuts, they have shed workers at an alarming rate. According to the Canadian Association of Oilwell Drilling Contractors some 25,000 people will be made redundant this year.

Meanwhile, the US shale industry is suffering too. According to the latest production data published by the state government, the crude output from one of the America’s largest shale regions, North Dakota, has peaked.

The reason being given is the slump in oil prices. According to the latest figures, the state produced 1.17 million bpd in April, down from a peak of 1.23 million bpd in December.

And its not just in North Dakota. Worryingly for the industry, the number of rigs drilling across the US continues to fall.

Indeed, it is not just oil that is suffering. Acording to Oilprice.com, the “oil glut is having a knock on effect on natural gas drilling across the United States”, where the gas boom is “coming to an end”.

So it looks like there will still be turbulent times ahead for the North American oil and gas industry, with all the uncertainty that brings.