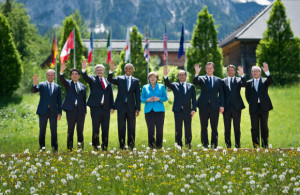 The front pages of many of this morning’s newspapers reflect the ground-breaking pledge yesterday by the Group of Seven industrial powers, known as the G7, to decarbonise the global economy by the end of the century.

For example, “G7 in historic accord to phase out fossil fuel emissions this century”, is the banner headline in the Financial Times.

Whilst the pledge has to be welcomed as another positive step to tackling climate change, it has to come with some obvious caveats.

At the moment it is only a pledge from the G7 with lots of wriggle room: we have seen ambitious pledges fall short from them before, especially on grand goals to alleviate world poverty, that have never been delivered.

And of course it can only be seen as a stepping stone to the all-important binding agreement at this year’s pivotal UN meeting in Paris, where we need to see specific CO2 reduction targets and time-tables for other countries too, as well as the G7.

These concerns have not gone unnoticed. “We think it very encouraging that the G7 leaders made climate change a central focus of their discussions at this summit, not least as it will add to the political momentum ahead of COP-21 in Paris later this year”, notes Mark Lewis a senior analyst tracking energy transition at Kepler Cheuvreux. “Nonetheless, the Declaration appears short on specific commitments concerning how the objectives aspired to can in practice be achieved,” he adds.

The first step to achieving that pledge would be to stop subsidizing fossil fuels. A report published by Oil Change International last year, entitled, Subsidizing Unburnable Carbon: Taxpayer Support for Fossil Fuel Exploration in G7 Nations, identified billions of dollars in subsidies for fossil fuel exploration from the world’s wealthiest countries. Yes, the very same countries that yesterday called for the ending of fossil fuels.

Secondly, the politicians need to start thinking about how to stop new investment in fossil fuels, because currently the pledge still has no implications or ramifications on the daily oil and gas industry and how it operates.

The politicians maybe talking about the end of oil, but the money men are not listening. If you flip the Financial Times to the front page of today’s “Companies and Markets” section there is story on how Sam Laidlaw, the former head of gas giant, Centrica, is leading a private equity firm that will spend up to $5 billion on fields in the North Sea, Africa and Southeast Asia.

The new London-based company, which is called Neptune, plans to exploit the collapse in oil prices to buy assets on the cheap and build a substantial portfolio producing up to 100,000 barrels a day of oil and gas. Laidlaw tells the paper that this is about “adding barrels” and “adding reserves”.

Since last October, according to Wood Mackenzie, the private equity industry has directly and indirectly been involved over 25 exploration and production deals worth almost $11 billion.

And this is just a foretaste of what is to come: the private equity sector now stands to spend over $40 billion on exploration and production deals. In total that is over $50 billion on oil and gas.

So the politicians maybe talking about the end of oil, but the money men just keep on investing in oil and gas regardless. It is business as usual.