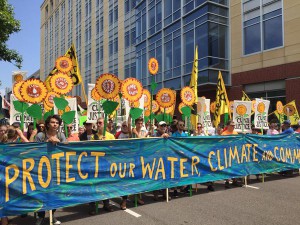 It was billed as the biggest anti-tar sands march the American Midwest has ever seen. And they came in their thousands to St. Paul in Minnesota on Saturday.

At one point the march stretched “as far as the eye can see,” according to one eye-witness. It was estimated that some 5,000 people took part.

The organisers of the “Tar Sands Resistance March” had promised that that people would come together to “send a clear message: keep toxic tar sands out of America’s Heartland, fight for clean water, clean energy, and a safe climate!”

And come together they did, ranging from young and old, to veteran campaigners to first time protesters. The march was led by Indigenous groups, but organisers also included national and local environmental groups as well and thousands of concerned citizens.

Marchers carried banners calling for climate justice, indigenous rights and clean water, such as: “We don’t want your tar sands oil; we won’t let you kill our soil,” and “Pipelines spill, tar sands kill.” There were dozens of painted sun-flowers too. Some marchers had pained themselves in “oil”, others wore gas marks and some played drums.

The protest was about more than just the highly controversial Keystone XL pipeline. The Great Lakes area is one of the main import routes for Canadian dirty crude from Canada into America and the region is threatened by other pipelines, such as the Sandpiper pipeline and Alberta Clipper.

The rally came at a critical time, coming just one day after Minnesota regulators endorsed Enbridge’s $2.6 billion Sandpiper pipeline that would carry North Dakota crude oil from the Bakken to Wisconsin.

Pipeline company Enbridge is also attempting to increase the capacity of its Alberta Clipper pipeline from 450,000 to 570,000 barrels per day. The company’s ultimate goal is to increase pipeline capacity to 880,000 bpd, which exceeds that of Keystone XL.

One of the 20 or so speakers was Bill McKibben, from 350.org: “The fossil fuel industry has been winning for 200 years, but their winning streak is over,” McKibben said. He added that Minnesota is now the “ground zero” in the climate fight.

Other organisers voiced their concerns too: Tom Goldtooth, head of the Indigenous Environmental Network, said “The frontline communities are strengthening the resistance. They’re concerned, and we are linking up the pipeline resisters in Canada, northern Minnesota, out east and more.”

“The movement promoting clean energy prosperity in place of polluting fossil fuels is growing and being heard in every corner of the country,” added Terry Houle, co-chair of the Sierra Club’s Northstar Chapter, which helped organize the event.

Houle argued that the march “picks up where last year’s Peoples’ Climate March in New York left off—people from all walks of life are calling on the Administration to keep dirty fuels in the ground for the sake of clean air, clean water, and a stable climate.”