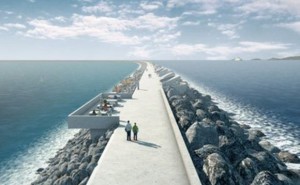 The world’s first major tidal lagoon renewable energy scheme has moved a step closer after a Chinese construction company has been chosen to build the scheme in the UK.

It is hoped the project will deliver 500 gigawatt hours of electricity a year, enough to power approximately 120,000 homes.

Tidal Lagoon Swansea Bay added that the proposed deal could “kick-start a programme of Chinese investment into UK infrastructure” whilst, at the same time allowing British expertise to be exported back to Asia.

Like many fledgling renewable energy projects, it will only be viable if it receives generous subsidies, which would exceed those currently given to onshore wind turbines. So although Swansea Bay Tidal Lagoon Power has raised £200m of institutional funding, it is still awaiting to hear from the government as to what level of subsidy it will be entitled too.

The company is hoping that once completed the scheme could be replicated internationally, with interest from as far away as India.

But first it has to prove lagoon tidal power can work in the UK. There are numerous challenges ahead. The ambiguous scheme involves a six-mile horseshoe-shaped sea wall designed to power turbines through tidal movements. Building an infrastructure project this big though will have an impact on the marine and land environment, something being closely monitored by conservation and environmental groups.

One highly contentious issue is where to locate the stone for the sea wall. It will take a huge amount of rock to build – with some estimates that this will amount to 5 million tonnes – which the project partners want to transport from across the Bristol Channel in Cornwall.

However, the plan to reopen a quarry in Cornwall to source millions of tonnes of rock faces local opposition as the quarry is located on the beautiful Lizard Peninsula. This means that there could be months of fighting ahead before the project finally starts being built.