Canadian oil industry watchers noted a Canadian oil price recovery in April and May as the heavy oil benchmark Western Canadian Select (WCS), climbed back from a 2014 trough of $28/bbl below West Texas Intermediate (WTI) in July 2014 to a high of $8/bbl below WTI in mid-May 2015 (see Figure 1). 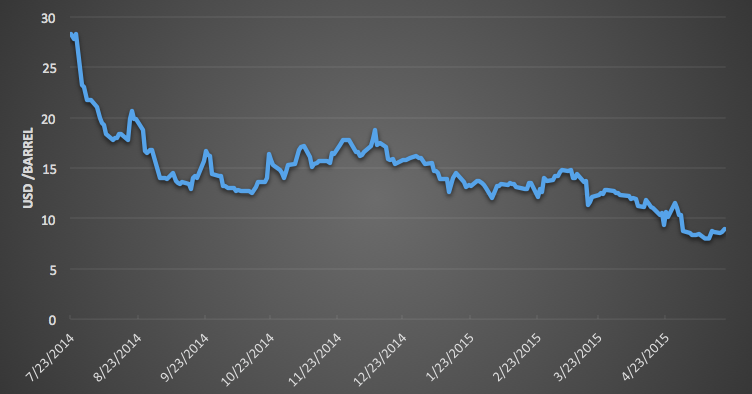 While some have speculated that the narrowing differential is a sign of increased market access for Canadian heavy crude, primarily attributed to the opening of Enbridge’s Flanagan South pipeline between Illinois and Cushing, OK, the real reasons are less reassuring for tar sands producers.

While the differential’s decline to around $12/bbl in January may be partly linked to Flanagan, the April decline to around $8/bbl has more to do with tar sands production coming off line for maintenance. This speaks to the longer term issue facing tar sands producers; that rising production in the absence of a new major export pipeline, will push differentials back out and hit profits hard in the new low oil price environment.

April and May saw upgrader maintenance by Suncor, Syncrude and Shell that took around 250,000 b/d of synthetic crude production out of service. While synthetic crude competes in the light oil market rather than the heavy crude market represented by WCS prices, the reduced flows into storage and pipes eased pressure on the pipeline system that carries both crude grades out of Canada. June and July will see around 80,000 b/d of upgrader capacity undergoing maintenance at CNRL and Nexen, while maintenance is also planned at production sites owned by Suncor, Devon and MEG.

Meanwhile, Southern Pacific Resources Corp. announced it will cease production at its 12,000 bpd SAGD operation at Mackay River as it files for bankruptcy.

In addition, wildfires in the Cold Lake region may shut in up to 300,000 bpd of mostly in situ bitumen production from Cenovus, MEG, Devon, CNRL and others.

All but the Southern Pacific Resources shut in are temporary, and as these flows come back on line, along with new project startups expected this year, we can expect to see the WCS differential widen again as pipeline capacity fills up.