Media reporting on oil price changes tends to focus on the ‘new normal’, and often overlooks that oil prices have always been cyclical. What might we learn from the cycle, in order to think about longer-term campaign strategy?

In particular, what if the industry’s expansion frontier starts to move away from the expensive extreme oil sources such as the tar sands, tight oil, ultra-deepwater and the Arctic, towards cheaper oil in previously out-of-bounds countries?

Broadly speaking, the cycle consists of alternating phases of high or low price, each lasting for about ten to fifteen years. Looking back at the last half-century, there have been two complete periods of the cycle: two low-price phases and two high. 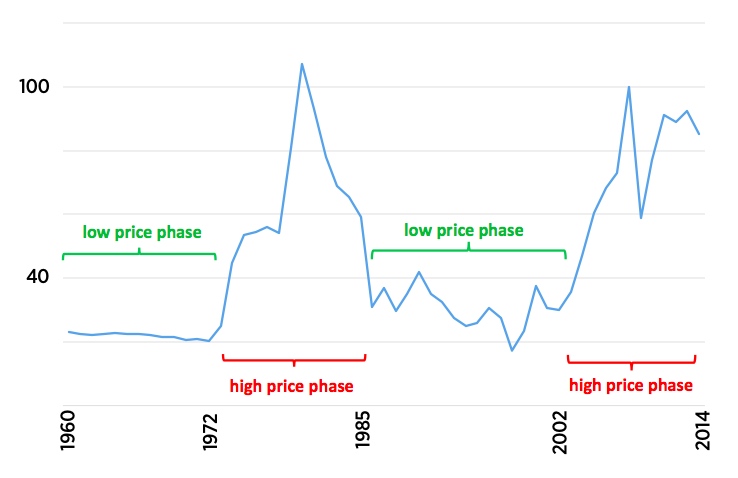 The important factor shaping these phases is the shifting policies of oil-exporting countries, particularly within OPEC.

When the price is high, revenues are plentiful, and the OPEC governments feel less in need of help from international oil companies (IOCs). Meanwhile, the IOCs return record profits, which creates political demands for restricting them. Thus the high prices of the last decade saw governments take away IOC stakes or tighten their contractual terms – in most of South America, and in Russia, Kazakhstan, Algeria, and even Indonesia.

In contrast, low prices make oil-dependent governments desperate for more revenue. Often this means welcoming IOCs back in, with their capital and technology able to extract oil at a faster rate than state-owned companies. Hence the low prices of the 1990s led to the ‘Apertura Petrolera’ when IOCs got back into Venezuela, some companies’ tentative re-entry into Iran, and the rapid privatization of the post-Soviet oil industry.

Right now, we might be seeing the beginnings of such a trend. The Iraqi government has recently said it will offer far more generous contracts to foreign companies, which were blocked by popular opposition during the occupation years. The government wants short-term fiscal relief – as investment comes from private companies rather than state budgets – at the expense of longer-term revenues.

The lower oil price has also put significant pressure on Iran to agree to a nuclear deal, which could lead to IOCs getting back into the country as soon as 2016. Iran and Iraq together possess nearly a fifth of the world’s oil reserves.

Mexico is reopening its oil industry to foreign investment for the first time since 1939. While the decision predates the oil price fall, it will reinforce the trend.

So what does all this mean? The climate movement’s strategy has been rightly focused on stopping the growth frontier of high-cost, extreme oil, especially in Canada’s tar sands and in the Arctic. This should certainly continue, as the lower price reinforces the campaign pressure to put a lid on those oil sources.

But thinking longer term, we might prepare ourselves for a possible IOC return to cheap oil. A good start would be building alliances and solidarity with civil society – indigenous peoples, frontline communities, trade unions and environmental groups – in oil-exporting countries. Following our successes in North America, we might need to re-emphasize the international dimension of our movement.