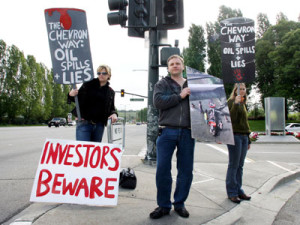 Later today, senior executives at Chevron will face a barrage of questions concerning climate change, including one whose intention is to “rock the boat.”

But that is not all –  company executives will also be grilled over mounting evidence that Chevron “falsified” evidence in its bitter and long-running Ecuador pollution case.

Just days after Shell executives faced a similar grilling over climate change, Chevron will also be questioned by fund managers concerned about the oil giant’s policies on global warming.

Indeed, Resolution Seven on the AGM’s agenda, which is being promoted by As You Sow, a US shareholder group, calls on the oil company to cease investing in exploration for new reserves that are likely to be unburnable and become “stranded assets,” if we are to keep to internationally agreed carbon emission limits.

Andy Behar, chief executive of As You Sow, said: “As the world moves to cleaner energy sources to avoid catastrophic harm to the planet, it is increasingly likely that the billions of dollars of shareholder capital the oil majors are ploughing into finding and developing new reserves will be stranded.”

The resolution is backed by the Asset Owners Disclosure Project (AODP), which is encouraging its 1,200 pension fund members to back it.

Julian Poulter, chief executive of the AODP, told the Financial Times that, although the resolution has little chance of being passed, this is a “rock-the-boat moment like no other”.

Resolution Seven is not the only awkward moment the company’s Board face. Numerous indigenous leaders have also travelled to challenge the company.

One such leader, Humberto Piaguaje, from Ecuador’s Secoya indigenous tribe, plans to raise numerous issues regarding the company’s highly contentious legal case in the country. The Secoya ancestral land surrounds the Aguarico River, which was one of Texaco’s (before being taken over by Chevron) prime dumping grounds for billions of gallons of toxic produced waters.

Texaco left a highly toxic legacy in the rainforest, including 1,000 abandoned toxic waste pits and 400 well sites. Local residents have suffered high cancer rates and other oil-related health problems. For over a decade, the Secoya have been fighting Texaco – and subsequently Chevron – in a long running legal dispute.

According to media reports, Piaguaje will raise the issue of “of a new forensic report that proves Chevron’s star witness lied under oath”. The report by computer experts reportedly proves Chevron lawyers “falsified evidence to try to frame lawyers for the indigenous groups by claiming they wrote the trial court judgment when in fact it was written by the judge.”

The Ecuadorian leader will also talk about new internal Chevron videos, leaked to the campaign group, Amazonwatch, which suggest that Chevron scientists tried to “defraud” Ecuador’s courts to evade a court-mandated clean-up of widespread oil contamination in the Amazon.

Piaguaje, who heads the tribal coalition that recently won the judgment against the company after 11 years of legal proceedings in Ecuador’s courts, accused Chevron of “resorting to what appears to be the deliberate falsification of evidence” to evade paying money to the people of Ecuador.