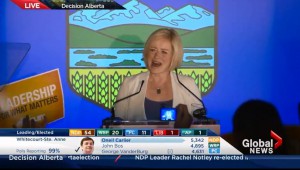 A huge orange tidal wave swept through the Albertan political landscape yesterday, re-writing the history books and ripping up the decades-old political order.

In an astonishing victory, the left of centre New Democrats (NDP) won the Albertan election last night ending 44 years of Conservative rule in the province.  The size of the political vicxtory cannot be under-estimated.

The Canadian Star summed it up as a “tectonic shift in Alberta politics, which has seen government change hands only four times since the Liberals won the first election when Alberta became a province in 1905.”

In an emotional and euphoric speech last night she outlined to her ecstatic supporters how “I think we might have made a little bit of history tonight” and how “change has finally come to Alberta”.

Although seen as a relative political novice, the pundits were saying that Notely had been preparing for this moment all her life.

Her father, Grant Notley, helped found Alberta’s NDP and was the sole NDP member in the 1970s, before being killed in a car crash. The party has never been anywhere close to power though, with its highest share of the vote – 30 per cent  – in the mid-eighties.

All that changed last night with the NDP taking over 40 per cent of the votes, with 53 members elected.

A smiling and waving Notley promised “new people and new ideas and a fresh start for our great province”. This includes wide ranging policy change, including more investment for schools and hospitals, while increasing taxes on the rich and corporations.

And that of course means trouble for the dirty tar sands industry. During the election campaign Notley had promised a review of oil and gas royalties for the tar sands industry as well as proposing to reduce support for controversial pipeline export projects.

She picked up the theme in her victory speech. “Together we need to start down the road to a diversified and resilient economy.”

The Premier-elect told the cheering crowd “We need to end the boom and bust rollercoaster that we have been riding on for far too long. It won’t happen overnight but it must start and it will”.

Indeed the election had only been called due to Alberta’s finances plunging due to its falling revenue from the tar sands sector in crisis due to the plunging oil price.

And in a hugely significant move, Notely offered a welcome hand of reconciliation to the Canadian First Nations who have been at the forefront of fighting the tar sands industry and whose health has been suffering due to air and water pollution.

Notely outlined how “To Albertan Indigenous people, the trust we have been given tonight is a call to be better neighbours and better partners. I am looking forward to consulting with you and learning from you.”

This will have made deeply awkward listening for many in the tar sands industry who have been used to have it their own way in Alberta for the last decade.

It is hardly suprising that one newspaper reported: “Energy shares on Canadian stock markets are forecast to react negatively to her party’s victory.”