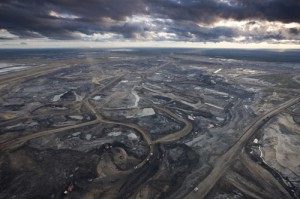 As the Albertan election heats up, the worsening economy – in large part caused by the plunge in oil prices – is taking centre stage in the province’s election campaign which comes to a head in early May.

The early election comes as Alberta, the home of the tar sands, is feeling the full force of the declining oil price, with some 8,000 job losses expected in the energy sector.

The province’s government is grappling with a multi-billion deficit and is scrambling to reduce the reliance of the province on the tar sands industry.

“The premise for calling the election … was that we need a structural shift that is going to take the economy off of oil so that the proportion of the budget that’s accounted for by oil and gas resources goes down,” Bruce Cameron, a local pollster told the Globe and Mail.

Not only is the tar sands industry responsible for this boom and bust jobs cycle, it is also contributing to a widening gap between rich and poor.

A new analysis, published yesterday by the Parkland Institute, entitled From Gap to Chasm: Alberta’s Increasing Income Inequality, concluded that “the gap between the rich and the poor in Alberta is the widest in the country”.

The bottom line is that over the last couple of decades, as the tar sands industry has grown, so has the gap between those earning huge petro-inflated wages and those not.

The Institute, which is an Alberta research network situated within the Faculty of Arts at the University of Alberta, found that the disparity between those Albertans at the top of the income ladder and those at the bottom has been growing faster than in any other province in Canada.

Back in 1990, Alberta was roughly comparable to Canadian national averages of income inequality levels. However by 2011, the most recent year for which the data is available, it was the worst province.

The author of the new factsheet analysis, who is a public finance economist, Greg Flanagan said “The data show clearly that Alberta is now the most unequal province in Canada, and that the gap between those at the top and those at the bottom widened in Alberta over the past 20 years twice as much as the national average.”

Flanagan added that “Equally worrisome is the fact that because Alberta is the only province without a progressive taxation system, Alberta saw the least improvement in income equality after taxes.”

The rich have certainly got much richer, with the share of total income enjoyed by the top 10% of income earners in Alberta climbing by almost 30% between 1992 and 2007.

Meanwhile, the share of total income that went to the bottom half of earners in the province dropped over the same period, and has flatlined at or below 16% of total income since 2000.

“All the parties in this election should be presenting plans to address what is clearly a serious inequality problem in Alberta, and one that is getting worse, not better,” says Flanagan, who called on a significant shift to progressive taxation in Alberta to help reverse what he called “this troubling trend”.