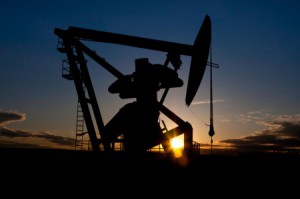 The global oil price rose slightly this morning on the back of the news from the US government that US shale oil output is expected to fall for the first time in four years.

Yesterday, the US Energy Information Administration predicted that US shale production would fall by 57,000 barrels per day in May this year.

The EIA forecasted that the seven major shale formations in the US: Bakken, Eagle Ford, Haynesville, Marcellus, Niobrara, Permian and Utica will produce a total of 5.56 million barrels of crude oil daily next month, down from 5.62 million barrels per day in April.

Although the most productive formation, Permian, will see a slight increase in production by 11,000 barrels per day to 1.99 million, the output at the next highest producer, Eagle Ford, will drop 33,000 barrels daily, while the output from Bakken will decline by 23,000 bpd next month.

The production of shale gas is due to decrease by 23 million cubic feet of gas per day as well.

The news is extremely interesting as it could mean that finally we are seeing the Saudi strategy of allowing global oil prices to plummet as a way to undermine US shale production as paying off.

But even with US shale production now declining, do not expect any let off from OPEC. As an article on Oilprice stated late yesterday the price war between OPEC and US shale producers is likely to continue.

It stated: “the oil price war between OPEC and U.S. producers could last longer than initially expected, with oil prices remaining at levels of around $55 per barrel or lower for the rest of 2015, and potentially well into 2016.”

What this means is that the continuing price war could signal the beginning of the end of the US shale boom, which has helped boost US oil output by more than 4 million bpd since 2010.

Indeed, Deutsche Bank, Goldman Sachs and HIS are all now projecting that US oil production growth will now end.

As I have previously blogged, we have already seen widespread lay-offs and jobs cut as companies cut back on production. Indeed, last week the number of drilling rigs in play declined by a further 42 to 760, the lowest number since December 2010.

“We’re going off an inevitable cliff,” because of the shrinking rig counts, Carl Larry, head of oil and gas for Frost & Sullivan LP, told Bloomberg yesterday. “The question is how fast is the decline going to go.”