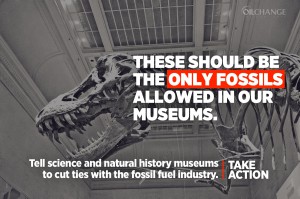 David Koch, the climate change-denying billionaire, currently sits on the board of two of our nation’s largest and most respected natural history museums.

The Koch Brothers are notorious for corrupting our democracy and peddling climate denial in order to protect the profits they make while destroying the climate. But their influence apparently stretches beyond politics — even the museums we bring our kids to are under the thumb of oil moguls intent on spreading misinformation.

Some of the world’s top scientists have had enough of this and so have we. Leading scientists, including several Nobel Prize winners, released an unprecedented letter calling on science and natural history museums to cut all ties to the fossil fuel industry. We’ve also teamed up with a great group of partners calling on the Smithsonian and American Museum of Natural History to kick David Koch off the board.

The response has been incredible — the letter and campaign has already received a massive amount of press coverage and well over 100,000 signatures.

This campaign comes on the heels of news that Smithsonian-affiliated scientist Willie Soon took $1.2 million from Big Oil, including the Koch brothers, to publish junk science denying man-made climate change, while failing to disclose any funding-related conflicts of interest.

Museums are one of the most trusted sources of information in the country, especially for our children. They have a tremendous influence on our culture, yet are increasingly influenced by individuals and corporations with their own agendas.

Our museums can’t maintain their credibility and serve as educational beacons when they’re tied to fossil fuel interests who continuously work to cloud the science and spread misinformation.

Let’s kick the polluters out! You can take action by clicking here.