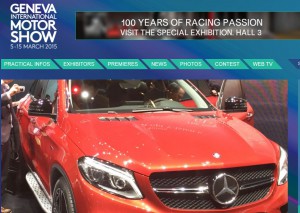 If you thought that growing awareness about climate change, coupled with years of austerity and recession, would mean that European drivers would be buying small fuel efficient cars, you would be wrong.

Although the pomp, swagger and pure unadulterated panache of Motor Shows do not totally reflect what your average consumer buys, they do give an indication of where the auto makers think the market is heading.

And the bad news for those worried about climate change is that big is back. One of the more prestigious Motor Shows in Europe starts this week in Geneva. And the sharp suits from the auto industry are showcasing a new round of SUVs for the masses and super-cars for the rich.

The so-called eco-consciousness of the industry – where fuel efficient and alternative fuel vehicles were pushed – has gone. A plunging oil price will only help the feeling that the average consumer can afford to buy a car the size of a small truck.

As Forbes noted latest week: “If you want to see the latest thing in autonomous cars, electric ones, fuel cells, or connectivity, don’t go to the annual car show here next week.”

It is all about SUVs and supercars now.  “Geneva will showcase exotic supercar playthings for the super rich”, notes Forbes.

And let’s not forget the SUV. Today’s Financial Times, also reporting from Geneva, outlines how the SUV has become “the must-have car of the 21st century”.

“The trick is to have an attractive car because people will be prepared to pay more for that,” Håkan Samuelsson, chief executive of Volvo, tells the paper: “And right now the market considers the SUV an attractive car.”

And so do European consumers who are “currently dumping their hatchbacks and sedans and buying SUVs,” according to Forbes.

Take Germany for example. In 2005, there were just under 60 SUV models on the market. Now that has increased to 90. Professor Ferdinand Dudenhoeffer from the Center for Automotive Research at the University of Duisberg-Essen argues that “Cheaper fuel and new models are whetting buyers appetite for SUVs. Manufacturers will have a hard time selling expensive (electric) cars in Germany and the world”.

And it is not just in Germany. As Europe’s love affairs with the SUV grows, they have increased from a market share of 5 per cent to approximately 22 per cent, with some industry analysts predicting that a third of all cars on Europe’s roads by the end of the decade will be gas-guzzling SUVs.

And this can only be bad news for the climate. On average, a SUV emits about 35 per cent more CO2 per kilometre than a conventional hatch-back or saloon.  “Cutting CO2 is clearly difficult when your customers want to drive bigger, heavier cars,” one industry analyst notes.

And its not just more CO2 that SUVs emit, its other pollutants too. Ironically, today Europe’s environmental watch-dog, the European Environment Agency, is warning that hundreds of thousands of Europeans will suffer an early death in the next two decades as the result of the failure by governments to act on air pollution.  Their warning is likely to be ignored by the sharp salesmen in Geneva.