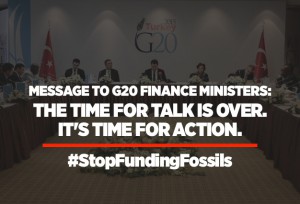 Today and tomorrow (February 9 and 10), finance ministers from the G20 are gathering in Istanbul, Turkey to discuss G20 priorities leading up to the G20 Summit taking place in November.  This year Turkey holds the Presidency and has marked this year as “2015 Year of Implementation,” stemming from concerns over long delayed G20 commitments.  The Turkish Presidency has also determined climate change as one of this year’s priorities coinciding with the UNFCCC negotiations set to make a global agreement in December.

On the subject of long overdue G20 commitments and prioritizing climate change, it has been 5 years since the G20 committed to phase out inefficient fossil fuels subsidies, and thus far, very little concrete progress has been made.

Last Friday, 39 organizations from across Europe, Asia, Africa, South America and the United States sent a letter to the Turkish G20 President and all G20 finance ministers, calling for the ministers to set out a strict timeline for the phase-out of fossil fuel subsidies – starting with elimination of exploration subsidies and safeguarding against the introduction of new subsidies through G20 infrastructure investment frameworks.  The letter further points out that such money would be better spent on climate actions at home and abroad.

A recent report by Oil Change International and the Overseas Development Institute found that G20 governments are spending approximately $88 billion a year on finding new oil, gas and coal reserves.  We already know that existing fossil fuel reserves are far beyond what our climate can withstand. Scientists have determined that two thirds of known fossil fuel reserves need to stay in the ground to maintain a good chance of limiting temperature rise to 2 degrees Celsius above pre-industrial levels – the internationally agreed target.  As such, it is highly inefficient for governments to continue subsidizing fossil fuel exploration and must immediately eliminate all such subsidies.