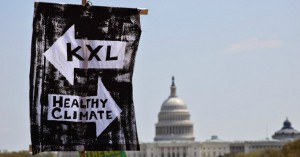 A political show-down is now inevitable after the Senate yesterday passed a Bill to force approval of the politically toxic Keystone XL pipeline. In doing so, they have set up an bruising political clash with President Obama who is almost certain to veto the Bill.

As Obama decides what to do, there will be many issues he has to consider. Over the years the fight over KXL has become to symbolise much more than a length of steel transporting dirty tar sands oil from Canada through America for markets around the globe. This debate about the pipeline is one about the future of America too.

Ironically, it is a fight the Republicans seem to want with relish. When they won control of the Senate late last year, the Majority Leader, Mitch McConnell of Kentucky, pronounced that KXL would be a priority for the new Congress. And he has been true to his word. Obviously the Republicans thought they had a political winner here, but public support for Keystone appears to be waning quickly.

But there are huge questions that swirl around the pipeline. Do we want a society where the powerful oil barons hold sway over our politicians, who do their bidding for them? Will we allow the building of a pipeline in the full knowledge that the extraction of the oil it carries is causing significant environmental and health harm to Indigenous communities back in Canada?

Do we build a pipeline knowing that the oil transported within it is some of the dirtiest oil on the planet?  We know – for the evidence is incontrovertible – that when burnt the oil will accelerate climate change hurtling the world towards a highly unpredictable and dangerous future.

One of the world’s leading climate scientists James Hansen has called KXL the “fuse to the biggest carbon bomb on the planet.” He argues that “We simply cannot be that stupid if we want to preserve a planet for our children and grandchildren.”

So does the President act on the advice of climate scientists and start trying to leave the most carbon intensive oil in the ground as we try and put the world on a sensible path to a sustainable future. Do we stand with our kids and their grand-kids or with a bunch of oil-soaked Senators?

There is no doubt that if KXL is rejected it will slow tar sands getting to market and make it less economically viable: As analysts from Kepler Cheuvreux argue:

“The outcome on KXL is crucial to the question of stranded-asset risk in the Canadian oil-sands industry, as we think that without KXL it would be much more difficult to make an economic justification of new oil-sands projects”.

They add: “The key question now is whether President Obama’s objections against the bills that the House and the Senate have passed are purely procedural, or whether the President is equally opposed to KXL on principle given the impact it would have on greenhouse-gas emissions from oil-sands projects.”

Rejecting KXL would set a huge precedent that our concern for the future outweighs the greed of the present.

The Senate picked a side yesterday, in voting 62 to 36 in favor of building the pipeline.

Stephen Kretzmann, Executive Director of Oil Change International, reacted to the news by saying “The Senate has voted to approve Keystone XL, and has chosen to once again side with Big Oil’s money over our climate and our future.”

Others too have been vocal in condemnation. David Arkush, head of Public Citizen’s Climate Program, called the vote “shameful.” Senator Barbara Boxer, D-California, the top Democrat on the Senate environment committee added it was “a disgrace.”

Now all eyes are on Obama, who is widely expected to veto the Bill, although the Republicans have said if he does this they will then attach the pro-KXL Bill on to a must-pass piece of legislation.

Before this happens, Obama is expected to make a final decision on the pipeline. Given his recent vocal comments on climate change, he really only has one option. If he is serious about tackling climate change then he has to say no.