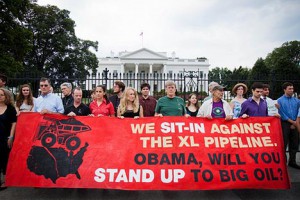 As Americans listen to their President tonight give his sixth annual State of the Union address, many people will be eagerly awaiting to see if he says anything about what has become one of the biggest political headaches of his Administration: the controversial Keystone XL (KXL) pipeline which will transport dirty tar sands from Canada to the US.

Obama’s annual address comes as a Bill authorising the building of the pipeline is passing through the Senate. Indeed, the Senate will debate KXL this afternoon, with voting commencing on key amendments.

As Obama has a threatened to veto any Bill passed by the upper house, the Republican pro-pipeline forces are looking for a message from Obama that he has had a recent change of heart.

They are expecting some kind of concession from the President, who did not mention the pipeline in last year’s speech. As the Hill notes: “Sidestepping the issue again this year would enrage Republicans.”

Republicans are gunning for a sign from Obama that he is prepared to give political ground on the issue.  “Keystone is critical for our relationship with Canada, which is our top trading partner in energy,” argues Congressman Charles Boustany from Louisiana. “Keystone is one of the first pieces in a trade/energy agenda.” Other Republicans are also calling on the President to publicly state during the speech that he will not veto the Senate bill.

The chances of Obama caving in to Republican pressure are remote, though, as is a definitive rejection. The KXL issue has become so toxic that “It would steal the show if Mr Obama announced a definitive opinion on the pipeline”, argues the Financial Times, “a symbol of the rival imperatives of economic growth and climate protection.”

In contrast, the environmental community, including Oil Change International, is looking to the President to definitely rule out the project, once and for all. No ifs and buts and maybes.

Yesterday Hannah McKinnon from OCI wrote how: “Putting the brakes on Keystone would do much more than put a serious dent in high-risk dirty tar sands production. It would signal that the status quo is over. That we live in a world that seriously questions major fossil fuel developments and infrastructure, and that asks the climate question: Can we afford massive new high carbon projects that lock in growing greenhouse gas emissions? and answers it honestly. No, we can’t.”

Jamie Henn from 350.org has even written a spoof paragraph on KXL for tonight’s speech. He imagines that the President could say this:

“KXL? WTF?!” This thing is a disaster! I have no idea how the State Department came to the conclusion that a 700,000 barrel a day pipeline that would carry the dirtiest fuel on the planet, producing the cumulative emissions of 46 coal fired power plants, wouldn’t have an impact on the environment.”

But maybe for a more nuanced opnion, the President should read the leader in today’s Financial Times which discusses the issues of climate change and falling oil prices, and how abundant fossil fuels are impeding efforts on climate change.

The FT is calling for action on climate and argues that “governments could make a start by withdrawing support from fossil fuels” by cutting subsidies or introducing a carbon tax.

Another way to do withdraw support is to prevent destructive climate infrastructure from being built. And that means saying No to KXL. Once and for all. Over to you, Mr. President.