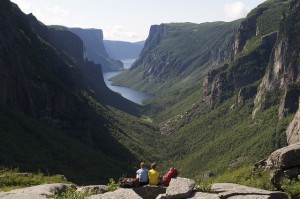 It is a majestic world heritage site located on the west coast of Newfoundland, which is seen as one of the jewels in Canada’s crown.

But it could be under threat from the controversial technique of fracking in the future.

So a group of eminent Canadians is urging the Premier of Newfoundland and Labrador as well as Canada’s Prime Minister Stephen Harper, to protect Gros Morne National Park from fracking as well as other resource development.

The Park is famous for its ancient forests and its rugged mountains, which are dramatically sliced by glacier-cut fjords.

The letter is asking for a fracking ban in the park as well as a buffer zone around it. The call comes a year after Canada was criticised by UNESCO for not doing enough to protect the world heritage site.

UNESCO designated Gros Morne a world heritage status back in the late eighties and back in last June its World Heritage Committee recommended that the Canadian federal government create a permanent protective zone around the park. But this has not yet happened.

In total 30 prominent Canadians have signed the letter, including Tim Baker from the local seven piece rock band Hey Rosetta; Lawrence Hill, who wrote the “Book of Negroes,” other writers Joseph Noyden and Lisa Moore; actor Greg Malone; and astronaut Roberta Bondar, who was Canada’s first woman in space.

“Gros Morne National Park is a magical place” says the letter. “It has captured our hearts, as it has those of hundreds of thousands of visitors from across Canada and around the world. Surely this is why Gros Morne is the cornerstone of the Newfoundland and Labrador tourism industry.”

The signatories argue that they were “shocked to learn about a proposal in 2013 to conduct oil drilling and hydraulic fracturing (fracking) activities next to the park, considering the threat that this would pose to its ecosystems, its pristine natural beauty, and the thriving local tourism economy.”

The letter echoes UNESCO’s call to create a buffer zone around Gros Morne “that will be kept permanently free from industrialization.”

Newfoundland province announced back in November 2013 that it was introducing a temporary halt to any fracking applications in the area after the government granted exploration licences in the Green Point shale, which is nearby the National Park. But there has been no permanent ban.

Greg Malone, the well-known local Newfoundland comedian, told the Canadian press that: “If we can’t protect the most brilliant places in our province and in our country, what are we doing?”

Eric Hebert-Daly, the executive director of the Canadian Parks and Wilderness Society, adds simply that: “Encroaching on the very few areas we have preserved as outstanding examples of the natural world is just, in my view, unacceptable greed. We don’t need to do that.”