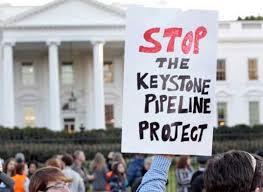 As the political squabbling over Keystone XL continues to dominate the political landscape in Washington, yesterday the Senate energy committee voted 13-9 in favour of a bill that would force construction of the controversial pipeline.

Let’s forget for a minute the fact that the Senators voting for KXL have received eight times more money from the oil and gas industry than those voting against it.

I let you reserve judgement as to what this says about the influence of dirty energy money on American politics.

The political showdown over KXL will now move to the Senate floor on Monday next week, as the Republicans try to make sure that KXL is the first substantial order of business for the new Congress, which they control.

The good news is that Obama is set to withstand the oil-backed push to approve KXL by vetoing any decision. He has good reason to do so. The first is that the falling oil price makes the pipeline all but redundant, as many of the tar sands projects cannot be exploited with a low oil price.

As the Financial Times reported yesterday: “With crude prices down more than half since June, the struggle over the proposed Keystone XL pipeline from western Canada to the US may look like two bald men fighting over a comb.”

But we can take the bald man analogy even further. The pipeline is completely nonsensical in that we cannot afford to burn the dirty tar sands it will carry due to climate change.

A new scientific analysis, published this week in the prestigious journal Nature, is the most authoritative attempt yet to examine just how many fossil fuel reserves cannot be burnt. And their number-crunching makes grim reading for Republicans, the oil industry and the Canadians pushing the tar sands.

According to the scientists some third of oil reserves, half of gas reserves and over 80% of current coal reserves are unburnable and should remain in the ground and not exploited for decades if global warming is to stay below the internationally accepted target of 2°C target.

And this is bad news for Canada, as the majority of its unconventional reserves of the tar sands will have to be left in the ground, further making KXL a redundant pipeline.

Basically, large scale exploitation of the tar sands is unviable. The Artic too should be off-limits.

As the paper says: “We show that development of resources in the Arctic and any increase in unconventional oil production are incommensurate with efforts to limit average global warming to 2 °C.”

The paper makes even grimmer reading for the coal industry, arguing that the United States, China, India and Russia will all have to leave vast reserves of coal in the ground.

Moreover the scientists argue that there is no point investors and the oil industry spending billions looking for more fossil fuels as we cannot afford to extract what has already been discovered.

Lead author Dr Christophe McGlade, Research Associate at the UCL Institute for Sustainable Resources said: “Policy makers must realise that their instincts to completely use the fossil fuels within their countries are wholly incompatible with their commitments to the 2°C goal.”

He added: “If they go ahead with developing their own resources, they must be asked which reserves elsewhere should remain unburnt in order for the carbon budget not to be exceeded.”

That’s a question someone needs to ask the Republicans and the Canadians, because they will have no answer.