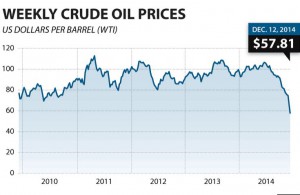 And so the free-fall continues. The price of Brent crude has fallen this morning below $60 a barrel for the first time since July 2009. The price of US crude is below $55.

It is becoming clearer by the day that there are going to be winners and losers in the oil price plunge. But there well be more losers than winners.

The British Chancellor is upbeat about the fall, arguing that the collapse in oil prices is “overall a very good thing” for Britain, the US and Western economies.

His comments echo those of Christine Lagarde, the head of the IMF, who said earlier this month that “it is good news for the global economy”.

Osborne told the Economic Club of New York that “We have important oil and gas industries in the US and the UK but nevertheless this is a big boost for American and British consumers and businesses,”

No doubt half of Osborne’s pleasure is the pain it will cause President Putin of Russia. “This puts a lot more pressure on Vladimir Putin,” he said. “The Russian budget is heavily dependent on high oil prices. He might be exposed by this.”

There is also no doubt that Russia is in deep trouble having been hit by a perfect storm of plunging oil prices and economic sanctions over Ukraine. Its dramatic move to raise interest rates to 17% this morning has also failed to halt the currency freefall.

Osborne’s remarks are papering over the cracks that the international oil industry is in crisis due to the oil price plunge.  As the Financial Times says today: “The scale of the current oil shock is difficult to exaggerate.”

Lets not forget that the falling oil price has wiped as much as 25 per cent off the market values of the oil majors, some like BP which are British-based.

The price collapse is hurting Osborne’s back-yard too. A report out yesterday from accountancy firm Moore Stephens outlined how 18 businesses in the British oil and gas services sector had become insolvent in 2014 compared with just six last year.

The Economist outlines how “thousands of jobs in the offshore oil and gas industry are at risk” from the falling oil price.

The consultancy firm, Wood Mackenzie, believes that 32 potential European oilfield developments that could produce just shy of 5 billion barrels of oil could be stopped if prices remain below $60 per barrel.

Globally, some $930 billion of spending on future oil projects is at risk according to the investment bank, Goldman Sachs.

Excluding the US fracking industry, the bank is arguing that cancelling these developments would deprive the world of 7.5m barrels a day of new output before 2025, which equates to 8 per cent of current global oil demand. And that analysis is based on a $70 figure.

But politicians hoping for a boost in spending due to declining oil prices may be in for a shock too. Stephen King, chief economist of HSBC tells the Financial Times that the  “lower oil prices good: higher oil prices bad” story is “no longer so obviously true”.

The paper concludes: “there is no guarantee cheap oil will cast the magic spell this time that it always has in the past.”

The bottom line is that oil – whether cheap or expensive – is not the answer. The chaos of the falling oil price is systematic of the problems of the fossil fuel industry.

You could avoid such chaos by beginning a radical, systematic transition of the global economy to clean energy. Maybe that is something George Osborne should consider.