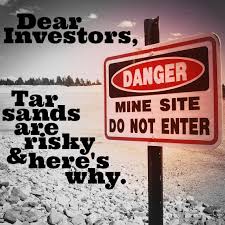 When legendary guitarist Jimi Hendrix wrote the song “Castles Made of Sand,” the critics argued that the sand metaphor symbolised “the temporary nature of existence” ” and “how nothing can be taken for granted”.

Well it seems that the huge multi-billion dollar Canadian tar sands industry took one simple thing for granted: that there would always be a high oil price to prop up its polluting, carbon-munching industry.

But the premise that underpinned a whole industry is now looking like a simple, but catastrophic school-boy error: As the oil price plummets, so the economic viability of billions of dollars worth of investment is now under threat.

The situation is so dire that some tar sands projects may well end up as “stranded assets” that will have to be abandoned.

Just how extremely vulnerable the dirty tar sands are to the falling oil price has been reconfirmed by a new analysis by the eagle-eyed analysts at the CarbonTracker Initiative (CTI).

CTI have calculated that a whopping $271 billion could be wasted on the tar sands if oil prices continue to fall.

They argue that some 90 per cent of the tar sands projects need $95 / barrel to make economic sense and so many projects could be heading for trouble if the oil price continues to stay low or does not rebound.

Many of these projects are in the early stages of development and are regarded by CTI as “particularly risky”.

Currently the crude oil price is way below what the industry needs to make a comfortable profit. Yesterday US crude oil futures were up slightly $1.50 from the day before at $78.68 per barrel, but still below the iconic $80 a barrel mark and well below $95.

Even at the mid-eighty range per barrel “this changes the whole dynamic” for the tar sands, argues CTI.  And all the tar sands projects need at least $75 per barrel to make sense.

According to the new CTI report: “The analysis still indicates that nine out of every ten barrels of potential oil sands production from discovery stage projects require over $95/bbl to provide a 15% IRR (Internal rate of return), a level we regard as necessary to reflect the risks associated with oil developments”.

The message to shareholders in the report is blunt:

“We believe shareholders should be concerned at this potential level of expenditure and should consider whether it is prudent to risk such large amounts of capital on high cost projects that need high oil prices to be commercial.”

Andrew Grant, financial analyst at CTI and lead author of the report argued that “If lower oil prices around the current $85 mark prevail, this will pose significant challenges to the business models of companies relying on opening up new oil sands projects.”

James Leaton, the research director at CTI goes further warning that the economics of tar sands “are getting more challenging. We expect to see more stranded assets, as expensive projects get shelved with no viable route to market.”

As if to make the point, profits for the Canadian Oil Sands company plummeted during the third financial quarter of this year by $149 million compared with the same quarter in 2013.

It is not just CTI who are concerned. As one commentator wrote this week about Canadian Oil Sand’s plummeting profits: “Significantly lower oil prices have created concern among investors that some of the monster yields paid by Canadian energy companies may be under threat.”

Another critic wrote of Hendrix’s Castles “Made of Sand” song that it was “a sharply observed reflection on life’s bitter ironies”.   And here is the simple irony: In the great race to exploit unconventional oil and gas – either via fracking or the tar sands – everyone was rushing to get their product to the market to exploit the once high oil price.

“Everybody is running as fast as they can, trying to drill and take advantage of those high prices,” John Gibbs, one American oil and gas firm told the BBC recently.

And in their desire for a quick buck, the industry forgot good old fashioned supply and demand economics. If you produce too much, and the demand isn’t there, the price will eventually fall.

And sand castles are, by their nature, temporary in existence.