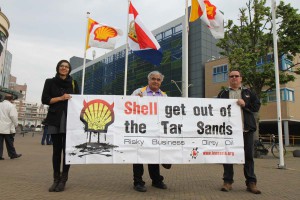 In a case that will be watched keenly worldwide, a Canadian Federal Court will today start reviewing the approval last December of the expansion of Shell’s controversial Jackpine tar sands mine in Alberta.

The oil giant first applied to expand the mine back in 2007, planning to increase output by 100,000 barrels a day.

The Athabasca Chipewyan First Nation (ACFN) is asking the federal court in Vancouver to overturn approval of the mine expansion, arguing their concerns about environmental impacts were ignored. The case is set to last three days.

The review panel that considered the approval concluded that expansion would cause irreversible impacts which included the permanent loss of thousands of hectares of wetlands, which would harm migratory birds, caribou and other wildlife as well as significantly impacting traditional plants used by the Athabascans for generations.

The Panel recommended 88 conditions and argued that many of Shell plans for mitigation were totally unproven. “The federal government made no real mention of the recommendations, saying (they) would be looked at and the project approved,” argues ACFN spokeswoman Eriel Deranger.

The ACFN also maintains three important Canadian laws would be violated by the proposals: the Canadian Environmental Assessment Act, the Species At Risk Act and the Migratory Birds Convention Act. Furthermore several international treaties that Canada has signed would also be infringed.

Back in January when the ACFN began their legal challenge, Chief Allan Adam said: “The approval of the project was hypocritical, on one hand they outlined all of the various violations of laws and legislation but ultimately approving the project in the public interest. Frankly, it’s insulting and unlawful”.

Another ACFN elder, Pat Marcel added: “The decision to approve the Jackpine Mine expansion will seriously threaten the survival of our traditional way of life.”

Marcel continued: “Canada has breached its own laws in approving the Jackpine Mine Expansion decision. We have worked for the past six years raising our concerns about the project and meaningful protection for our Treaty rights with nothing but empty promises from government and industry.”

Predictably both the Government and Shell maintain that due process was followed and that the Athabascan were engaged in adequate consultation, something which is dismissed by Eamon Murphy, the lawyer for the First Nations. “You met with us a few times, we exchanged some pieces of paper, but ultimately there was no real attempt to implement those recommendations,” he says.

The fight over the Jackpine mine is in many ways a microcosm of the wider fight between Canada’s First Nations and the rampant, highly polluting tar sands industry which is slowly poisoning their land, their water and their future.