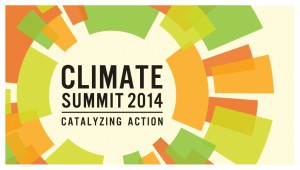 The actor Leonardo DiCaprio was one of a number of people to address the United Nations Climate Summit yesterday, urging them to take action to address “the greatest challenge of our existence on this planet.”

The Summit was the largest UN climate gathering since the failed summit at Copenhagen in 2009 and is seen as a vital staging post towards the all-important UN conference in Paris next year.

There were many impassioned pleas for action, not least from 26 year old poet Kathy Jetnil-Kijiner, from the Marshall Islands. Kathy’s new poem entitled “Dear Matafele Peinem”, written to her daughter, a powerful polemic for action on climate change, received a standing ovation at the Opening Ceremony.

The main assembly also heard from DiCaprio, recently appointed by UN Secretary-General Ban Ki-moon as a United Nations Messenger of Peace, who was one of a number of people to urge world leaders to take drastic action. “Now must be our moment for action,” he pleaded.

The actor specifically took aim on the need to “eliminate government subsidies for coal, gas, and oil companies”, adding that “we need to end the free ride that industrial polluters have been given in the name of a free-market economy, they don’t deserve our tax dollars, they deserve our scrutiny. For the economy itself will die if our eco-systems collapse.”

At the end of his speech he told the assembled dignitaries that “You can make history or be vilified by it.”

There are small encouraging signs that some progress is being made. To coincide with the meeting, some of the world’s biggest banks and investors pledged $200 billion by the end of next year to help tackle the crisis.

Ban Ki-Moon signalled that compared to past broken promises and political deadlock, that “change is in the air. Today’s climate summit has shown an entirely new, co-operative global approach to climate change”.

But there is still a staggering long way to go before an effective global deal to cut carbon emissions is reached. The Chinese Premier had not even bothered turning up to the Summit. The Indian Premier was also a no show.

US President Barack Obama made no specific financial commitments in what was seen as an otherwise passionate speech on climate change which he said would “define the contours of this century more dramatically than any other”.

Indeed, the conference ended on a sobering note when Nelson Mandela’s widow rebuked world leaders that their promises to tackle climate change did not reflect the scale of the problem.

Others remain sceptical too. Dipti Bhatnagar of Friends of the Earth even went as far as dismissing the summit as “a fool’s paradise out of touch with the climate emergency we are facing.”

The economist Jeffrey Sachs, who is an adviser to Ban Ki-moon, told the BBC bluntly: “I don’t think the political leaders are there. This is still a world dominated by geo-politics of fossil fuels.”