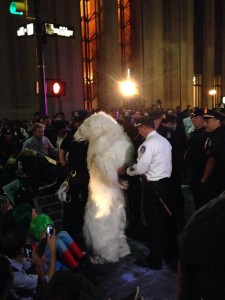 From early in the morning some 3,000 plus activists targeted New York’s financial district with a view to highlighting Wall Street’s role in climate change.

Organizers said the sit-in aimed to disrupt business in the financial district by targeting “corporate polluters and those profiting from the fossil fuel industry.” They succeeded in disrupting traffic and activities in the area for over eight hours.

Many were dressed in blue t-shirts to represent flooding; others wore “Captain Planet” outfits. There was even someone dressed in a full polar bear outfit.

For hours the protestors occupied Broadway, with hundreds staging a sit-in surrounding the iconic Wall Street Charging Bull statue.  Cordoned off by the Police, the Charging Bull was surrounded by protestors, one who tried unsuccessfully to lasso it.

Sitting near the bull, one activist, bread-maker, Ben Shapiro from Ohio said: “I wanted to come specifically to disrupt Wall Street because it’s Wall Street that’s fuelling this. I’m going after the source of the problem.”

Other protestors, accompanied by a brass band, unfurled banners and chanted “Whose streets? Our streets!” One banner included a 300 foot long “river” of people.  Two large inflatable balls, otherwise known as carbon bubbles, were floated on top of the raucous crowd towards the bulls. They were later popped by Police.

The response from Wall Street traders was predictable “I think it’s bullshit,” one broker called John told the Guardian. “I think anything that makes clients money is good for my clients, and it’s good for the country’s economy.”

Most of the day passed off peacefully but by the end over 100 people had been arrested, including someone in a wheel-chair, with a respirator.

Finally the polar bear was arrested too.

For the tide is changing against fossil fuels. Yesterday, on the eve of the UN Climate Summit today, the heirs to one of the biggest oil dynasty’s, the Rockefellers, announced that along with other leading financial institutions, they would divest more than $50 billion of fossil fuel investments from their portfolios.

“This is a threshold moment,” said Ellen Dorsey, executive director of the Wallace Global Fund, which has been working on the fossil fuel disinvestment campaign.

There is no doubt that Wall Street will be worried.